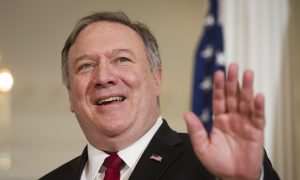 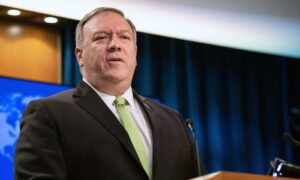 Pompeo: 'Impossible' for Firing of Inspector General to be Retaliatory
0 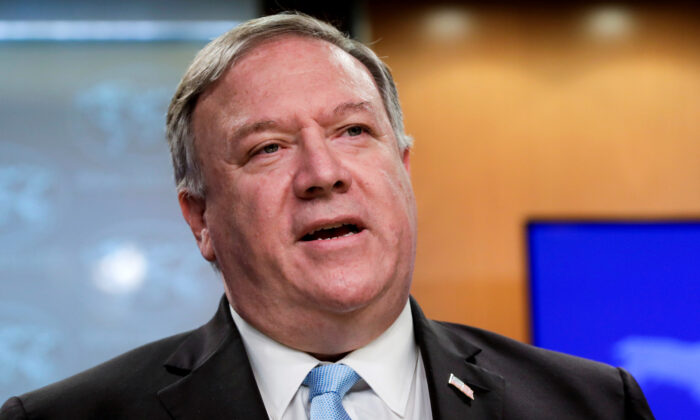 Secretary of State Mike Pompeo speaks during a joint briefing about an executive order from President Donald Trump on the International Criminal Court at the State Department in Washington on June 11, 2020. Yuri Gripas/Reuters)
China-US News

WASHINGTON—Secretary of State Mike Pompeo said on Friday the United States would in the future treat Hong Kong as a Chinese city rather than an autonomous one to the extent that China treats the territory as a Chinese city.

Pompeo told the online Copenhagen Democracy Summit that elections due in Hong Kong in September would “tell us everything that we need to know about the Chinese Communist Party’s intentions with respect to freedom in Hong Kong.”

He also said Washington was working its way through a decision-making process over who would be held accountable over curbs to Hong Kong’s freedoms.

Pompeo spoke two days after his first face-to-face meeting in months with China’s top diplomat, Yang Jiechi, at which the latter said Washington needed to respect Beijing’s positions on key issues and halt its interference in matters such as Hong Kong, while working to repair relations.

U.S.-China relations have reached their lowest point in years since the CCP (Chinese Communist Party) virus pandemic that began in China hit the United States hard.

Pompeo said his conversations with Yang had been “very frank” and Washington still did not have answers it wanted from China over the outbreak.

Among multiple points of friction are China’s moves to impose new security legislation on Hong Kong, which have prompted President Donald Trump to initiate a process to eliminate special economic treatment that have allowed the territory to remain a global financial center.

“To the extent that the Chinese Communist Party treats Hong Kong as it does Shenzhen and Shanghai, we will treat them the same,” Pompeo said.

“Any agreements that are unique between the United States and Hong Kong, separate and different to those we have with Beijing, we will move away from every one of those.”

Pompeo urged more European governments to speak out about China, saying the United States and its allies needed to “take off the golden blinders of economic ties” and see the risks of dealing with Beijing.

Pompeo’s remarks came a day after Trump renewed his threat to cut economic ties with China, with which he has been waging a trade war aimed at rebalancing a massive U.S. deficit.

Pompeo wrote on Twitter on Thursday that Yang had “recommitted to completing and honoring all of the obligations” of a Phase 1 trade deal agreed this year. The top U.S. diplomat for East Asia, David Stilwell, said coming weeks would show if there had been progress in the talks.

By David Brunnstrom and Humeyra Pamuk