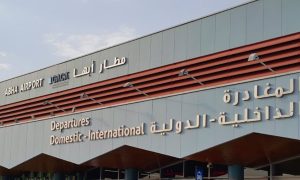 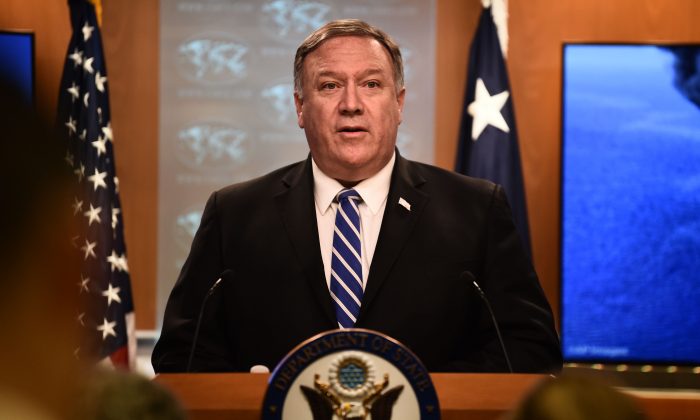 Secretary of State Mike Pompeo delivers remarks to the media at the State Department in Washington, on June 13, 2019. (ERIC BARADAT/AFP/Getty Images)
Middle East

Secretary of State Mike Pompeo said Iran was responsible for the June 13 attacks against two oil tankers in the Gulf of Oman, as President Donald Trump responded that it was “too soon” to even consider sorting out a deal with the country.

One of the tankers was set ablaze during the attack as the U.S. Navy rushed to assist the stricken vessels near the Strait of Hormuz. Each tanker was loaded with petroleum products with one vessel, named the Front Altair, burning for hours.

Pompeo said the evaluation was based on a number of factors that all pointed to Iran, including intelligence, the weapons used, and the level of expertise needed to conduct such an operation.

“On April 22, Iran promised the world it would interrupt the flow of the oil through the Strait of Hormuz. It is now working to execute on that promise,” he said. The strait separates the Persian Gulf and the Gulf of Iran.

.@SecPompeo: The United States will defend its forces and interests, and stand with our partners and allies to safeguard global commerce and regional stability. We call upon all nations threatened by #Iran’s provocative acts to join us in that endeavor. pic.twitter.com/snjIVxtl2t

The crew of the Norwegian-owned Front Altair abandoned the ship in waters between Gulf Arab states and Iran. Its crew was picked up by a passing ship and transferred to an Iranian rescue boat.

The second ship, a Japanese-owned tanker, was hit by a suspected torpedo, the firm that chartered the ship said. Its crew was also picked up safely. However, a person with knowledge of the matter said that torpedoes weren’t used in the attack, according to Reuters.

Additional details of the two attacks are still unclear.

Tensions between Iran and the United States, along with its allies including Saudi Arabia, have risen since Washington pulled out of a deal in 2018 between Iran and global powers that aimed to curb Tehran’s nuclear ambitions.

Iran has repeatedly warned it would block the Strait of Hormuz if it can’t sell its oil due to U.S. sanctions.

On Twitter, Pompeo described the attacks as “a threat to international peace and security,” and said that it marked an “unacceptable escalation of tension by Iran.” In May, the United States said Iran was behind another attack against four oil tankers off the nearby Emirati port of Fujairah. Iran denied involvement at the time.

President Donald Trump responded to the attacks on June 13, arguing that it wasn’t the right moment to make a deal, although he said he appreciated Japanese Prime Minister Shinzo Abe meeting with Iran’s leaders. Abe was carrying a message from Trump to Supreme Leader Ayatollah Ali Khamenei.

“While I very much appreciate P.M. Abe going to Iran to meet with Ayatollah Ali Khamenei, I personally feel that it is too soon to even think about making a deal,” Trump wrote on Twitter. “They are not ready, and neither are we!”

While I very much appreciate P.M. Abe going to Iran to meet with Ayatollah Ali Khamenei, I personally feel that it is too soon to even think about making a deal. They are not ready, and neither are we!

Crude prices climbed as much as 4 percent after the attacks near the entrance to the Strait—a crucial shipping artery for Saudi Arabia, the world’s biggest oil exporter, and other Gulf energy producers.

Iran hasn’t openly acted on its threat to close the Strait of Hormuz as U.S. sanctions caused its oil exports to drop to around 400,000 barrels per day in May from 2.5 million per day in April 2018.

Both sides have said they want to avoid a war.

Iran’s Foreign Minister Mohammad Javad Zarif said on Twitter it was “suspicious” that the attacks took place during Abe’s visit to Tehran.

Japan was one of the main buyers of Iranian oil until May when Washington ordered all countries to halt all Iranian oil imports or face sanctions of their own. Khamenei rejected Abe’s message from Trump.

“I do not see Trump as worthy of any message exchange, and I do not have any reply for him, now or in future,” Iranian state media quoted Khamenei as telling the Japanese premier.

Washington has dispatched additional forces to the region in recent weeks after accusing Tehran of threatening ships passing through there. Iran has denied being behind the attacks on ships and suggested they could be intended as a provocation.