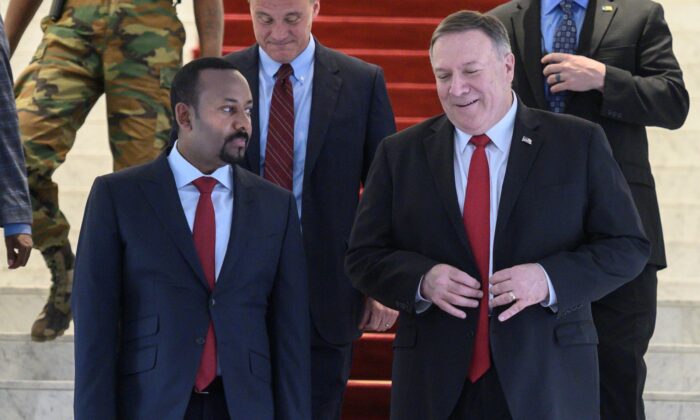 Secretary of State Mike Pompeo met with Ethiopia’s reformist Prime Minister Abiy Ahmed and other officials on Feb. 18 on a visit expected to focus on security, investment, and Ethiopia’s dispute with U.S. ally Egypt.

Their talks are expected to focus on security concerns ahead of Ethiopian elections this year, investment opportunities as Abiy opens up the economy to foreign investment, and a dispute the United States has been trying to mediate between Ethiopia and Egypt over Ethiopia’s giant Blue Nile hydropower dam.

Abiy took power in 2018 following years of anti-government protests. He freed political prisoners, won the Nobel Peace Prize for ending a long-running conflict with neighboring Eritrea, and has begun liberalizing sectors of the state-run economy.

Ethiopia, Africa’s second-most populous nation, has long been an ally of the United States, but the difficulty of doing business in its sluggish and bureaucratic economy has discouraged foreign investment.

Abiy has promised to liberalize the telecoms and banking sectors but this year he is likely to be occupied with elections scheduled for Aug. 29.

His reforms, while applauded abroad, have also unleashed simmering ethnic and political tensions at home as regional powerbrokers jockey for position. More than 2 million of Ethiopia’s 109 million citizens have been displaced, according to the United Nations.

Pompeo is on the second leg of a tour that has already taken him to Germany, Senegal, and Angola.