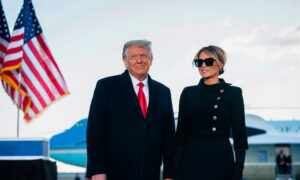 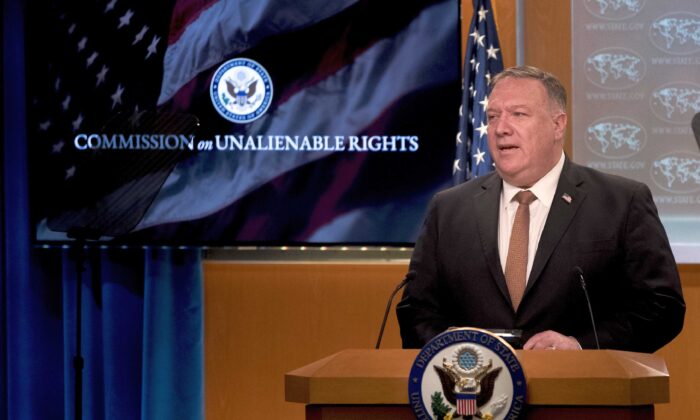 Then-Secretary of State Mike Pompeo speaks during a news conference at the State Department in Washington on July 15, 2020. (Andrew Harnik/Pool/AFP via Getty Images)
2022 Election

Former Secretary of State Mike Pompeo launched a political action committee (PAC) on Tuesday which will work to support Republicans candidates for the 2022 election that are dedicated to “conservative values upon which America was founded.”

Pompeo told Politico that the mission of the organization, Champion American Values PAC, is to oppose the Biden administration’s cultural and political agenda and regain majorities in both chambers of Congress.

“It is unambiguously clear to me that if we don’t get it right in the next 16 or 17 months, what will happen over these next four years will make it incredibly difficult for whoever is elected president in 2024. So that is my singular focus,” Pompeo said.

Pompeo started as a cadet at West Point and then became an officer in the U.S. Army before going on to run two manufacturing businesses in Kansas. He then went on to represent Kansans in Congress and became CIA director before being appointed as the secretary of state under Trump.

“I worked abroad to protect America from those who want to do us harm,” Pompeo said in a written statement Tuesday. “Today at home, our foundational ideas are under attack more than ever before, and I intend to stay in the fight.”

Pompeo said he has plans to visit states like California and Iowa to fundraise and speak with conservative groups. “We’re going to go out, and we’ve started this already, but we’re going to go out and expand to a greater degree, helping candidates all across the country,” Pompeo told Politico.

Since leaving his post in January Pompeo has been vocal about the shortcomings of the Biden administration’s policies, at home and overseas, saying he was compelled to fight against the censorship of conservatives and policies that weaken America’s standing in the world.

“Well, generically, when I hear the administration talk about ‘taking America back,’ they are talking about back to what President Obama did for eight years, where America was weak,” Pompeo said during an appearance on “Fox News Sunday. “We might have been liked—a lot of people talk about how they are having this really fun time over at the G-7, everybody likes President [Joe] Biden—what’s important is not that they like America, but that they respect us, that we deliver good outcomes for the American people.”

Pompeo also hit on the cultural issues that he is most concerned about and are seen by Republicans as crucial to winning primary voters, who care about the First Amendment and the founding principles enshrined in the Constitution and the Bill of Rights.

“I get asked all the time, ‘What keeps you up at night,'” Pompeo said during a recent radio interview, adding that all the threats of terrorists overseas are not his chief concern.

“None of that scares me as much as what’s happening in our universities and on our campuses today. I watch what’s taking place there and the inability for us to speak our mind, the fact that folks want to just put pressure on people who have a conservative mindset and just deny them the space to go speak,” said Pompeo.

“The fact that we now are accusing people, who are just saying things that are common sense about how to treat everyone equally and fairly, are being accused of being racist,” he continued. “Those are dangerous things in our democracy in our republic. They pose staggering risks, that if you cross that Rubicon, and we don’t push back, if we don’t fight for those values that we all care about ... if we lose those things, if we lose the bubble on those, you can send diplomats to 180 countries in the world and none of it will matter because if America is weak at home our capacity to influence the world is diminished.”