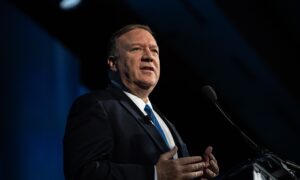 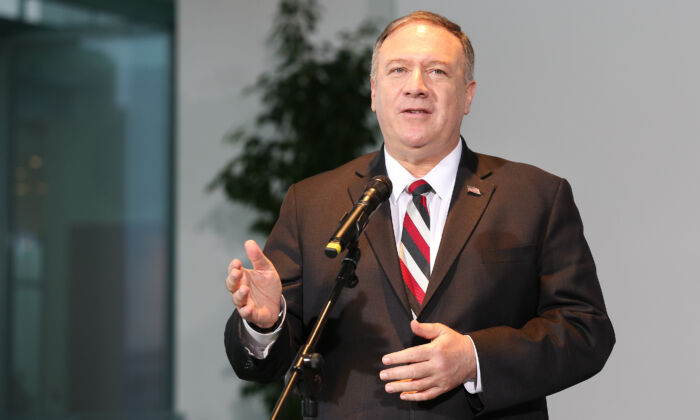 In a speech in Germany marking the 30th anniversary of the fall of the Berlin Wall, U.S. Secretary of State Mike Pompeo warned that the current threats posed by the Chinese Communist Party were akin to those that citizens of East Germany faced during the Soviet era.

“President [Ronald] Reagan thought that communism was a ‘disease’ and he called it an ‘insanity.’ How right he was,” Pompeo said.

He told the audience that he was stationed as an army lieutenant in Germany in 1986 and witnessed firsthand the suffering under communist rule.

He began speaking of the Chinese regime’s threats to the free world.

“The Chinese Communist Party [CCP] is shaping a new vision of authoritarianism … [It] uses tactics and methods to suppress its own people that would be horrifyingly familiar to former East Germans,” he said.

He began describing how Beijing has increased its military presence to assert its territorial claims—likely a reference to China’s aggression in the South China Sea, in addition to authorities denying entry to those who have made critical comments about the Chinese regime, and harassing the families of Uyghur Muslims who have sought refuge abroad.

“We must mix celebration with sobriety. … We—all of us, everyone in this room—has a duty” to recognize China’s threats, Pompeo said.

He warned of Beijing’s “acquisition of sensitive technology firms and Chinese companies’ intent to build out the world’s next networks,” calling out Chinese telecom giant Huawei in particular as untrustworthy “because it is subject to the power of the Chinese Communist Party.”

Earlier in October, the German government confirmed that it would allow Huawei to supply the country’s 5G networks, shunning a U.S. call for Western nations to exclude the company on security grounds.

But this past week, German defense minister Annegret Kramp-Karrenbauer said that the country could still ban the Chinese firm, if its 5G security standards could not be guaranteed.

Pompeo ended his speech by promising that the United States would take the lead in defending the values of the free world. “As Reagan said, two things were absolutely non-negotiable: our collective freedom and our collective future.”

This is the second time during Pompeo’s German trip where he criticized the Chinese regime.

On Nov. 7, Pompeo first remarked on the topic during a press conference with German Foreign Minister Heiko Maas in Leipzig, in which he talked about the 5G infrastructure in Germany.

“[Deciding whether to use Huawei’s system] is complicated, but it comes in the face of the challenges that are presented by the Chinese Communist Party,” Pompeo said.

Responding to a reporter’s question on Pompeo’s Nov. 7 comments, Geng Shuang, spokesman for China’s foreign affairs ministry, lashed out at the U.S. official: “We suggest Pompeo to stop accusing China without any evidence, otherwise it will be like lifting a rock and crush his own feet with it.”

In New York, Pompeo had given a speech at the Hudson Institute on Oct. 30, in which he said he planned to outline the challenges presented by the Chinese regime to the United States in a series of future speeches.

He clarified that the CCP regime was “not the same as the people of China,” while criticizing past U.S. administrations for failing to wake up to China’s aggression—allowing it to extend its influence around the world.

“We accommodated and encouraged China’s rise for decades, even when that rise was at the expense of American values, Western democracy, and security, and good common sense,” Pompeo said.