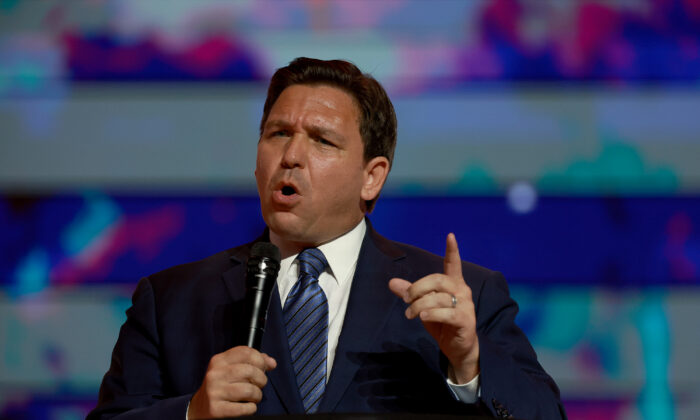 Former Secretary of State Mike Pompeo and other GOP leaders have responded to an FBI search of the 45th President’s Florida Mar-a-Lago home after former president Donald Trump said it was “currently under siege, raided, and occupied” on Aug. 8.

Decrying the alleged raid in a post on his social media app, Truth Social, Trump said, “these are dark times for our Nation.”

“After working and cooperating with the relevant Government agencies, this unannounced raid on my home was not necessary or appropriate,” he said.

Taking to Twitter following Trump’s post, Republican leaders condemned the alleged raid, with several warning that such a move could set a dangerous precedent, while others accused the Biden administration of weaponizing the Justice Department for political purposes.

Pompeo, the former secretary of state under Trump, said that executing a warrant against a former president of the United States was a “dangerous” precedent to set.

“The apparent political weaponization of DOJ/FBI is shameful. AG must explain why 250 yrs of practice was upended with this raid,” Pompeo wrote. “I served on Benghazi Com where we proved Hilliary (sic) possessed classified info. We didn’t raid her home.”

The raid is mostly likely connected to an investigation regarding Trump’s handling of official papers. His lawyer, Christina Bobb, confirmed with CNN on Monday night that the FBI had seized documents during their search at his Mar-a-Lago home.

The FBI is directed by Christopher Wray who was appointed by Trump.

Florida Gov. Ron DeSantis said the raid of Trump’s home represents “another escalation in the weaponization of federal agencies against the Regime’s political opponents,” while noting that people like President Joe Biden’s son Hunter Biden “get treated with kid gloves.”

Hunter Biden is currently under federal investigation for alleged tax fraud, lobbying crimes, and money laundering in a probe dating back to as early as 2018.

“Now the Regime is getting another 87k IRS agents to wield against its adversaries? Banana Republic,” DeSantis said.

Elsewhere, Sen. Lindsey Graham (R-S.C.) noted on Twitter that the midterm elections aren’t far off. Trump has hinted that he will run for president again in 2024, and teased last week that he could make an official announcement soon, either before or after the November elections.

“Time will tell regarding this most recent investigation. However, launching such an investigation of a former President this close to an election is beyond problematic,” Graham wrote.

Sen. Marsha Blackburn (R-Tenn.) questioned why the FBI had declined to raid the homes of previous administrations, including the Clintons and Obama.

“Bill and Hillary Clinton took $28,000 worth of furnishings from the White House. Obama violated the Presidential Records Act. Why did the FBI not raid their houses? This is a political witch hunt to take down President Trump,” the GOP lawmaker said.

Kevin McCarthy, the Republican minority leader in the House, said in a statement that the justice department had reached “an intolerable state of weaponized politicization” and vowed that, when Republicans take back the House, they will “conduct immediate oversight of the department, follow the facts and leave no stone unturned.”

“Attorney General Garland: preserve your documents and clear your calendar,” he added.

Rep. Barry Loudermilk (R-Ga.) also said on Twitter that the FBI raid on Trump’s home was “unprecedented and highly concerning,” and that “if the FBI is looking for classified info or incriminating evidence, they should start with Hunter Biden’s laptop.” He added the hashtag “#Demdoublestandard.”

Meanwhile, Ronna McDaniel, chairwoman of the Republican National Committee, said: “Absolute power corrupts absolutely. Countless times we have examples of Democrats flouting the law and abusing power with no recourse.”

“Democrats continually weaponize the bureaucracy against Republicans. This raid is outrageous. This abuse of power must stop and the only way to do that is to elect Republicans in November,” McDaniel added.

The FBI has declined to comment to The Epoch Times on the alleged raid.

While GOP lawmakers condemned the move, the Lincoln Project, an anti-Trump PAC, alleged in a statement that the raid is a “positive sign that Donald Trump may be brought to justice for the myriad of criminal offenses committed by him and his family while President.”

“Never before has a former President’s home been raided in a criminal probe. While this search warrant is seemingly for the mishandling of classified material, it is a serious crime that must be fully investigated,” the group said, adding that the raid is the “first step for law enforcement, or Congress, of holding Donald Trump accountable for the orchestration of a conspiracy to remain in power that resulted in the January 6th attack on our nation’s capital.”

“Such an assault could only take place in broken, Third-World Countries,” Trump added. “Sadly, America has now become one of those countries, corrupt at a level not seen before.”