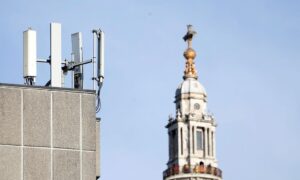 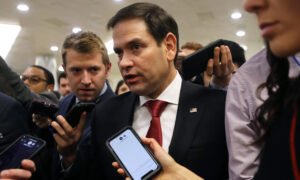 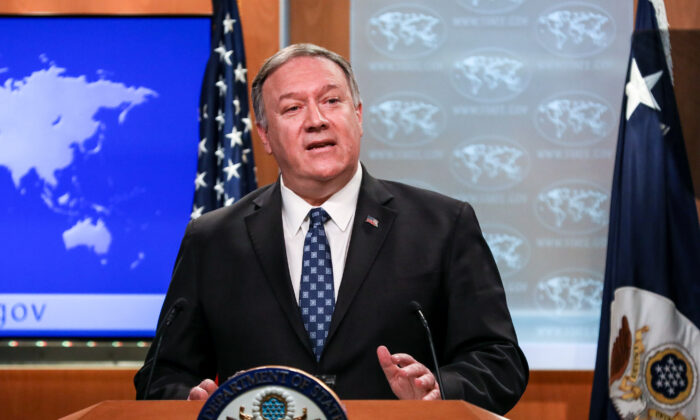 Secretary of State Mike Pompeo met with British leaders in London to reiterate U.S. concerns about allowing China’s Huawei to have a role in British communications networks, describing the Chinese Communist Party as the biggest threat of the current era.

Pompeo, seeking to defuse tension between the two allies, said recent actions wouldn’t affect broader ties. He said the United States and the UK would retain and enhance their special relationship once the UK leaves the European Union this week.

Speaking alongside British Foreign Secretary Dominic Raab at a think tank event on Jan. 30, Pompeo said that he regards the Chinese Communist Party as “the central threat of our times,” and urged the United States and its allies to ensure they have the military and technological power to ensure that this century is governed by Western principles.

A State Department spokesperson told The Epoch Times previously that it was “disappointed” by the United Kingdom’s decision and that there was “no safe option for untrusted vendors to control any part of a 5G network.” While Pompeo was en route to London for his two-day trip, he told reporters that “there’s also a chance” for the UK to rethink its decision.

Pompeo stressed that he expects concerns about Huawei can be addressed as more details emerge on what limits will be placed on the company, and with advances in communications technology. However, he showed no softening in his opposition to using Huawei, citing national security concerns.

Pompeo, during his Jan. 30 meeting with Johnson, spoke about the “importance of maintaining the integrity of communications networks” and about security concerns in the Middle East, as well as holding the Iranian regime accountable, according to State Department spokesperson Morgan Ortagus. Negotiating a U.S.-UK free trade agreement also was discussed.

“Such access points—even if it’s outside of the critical 5G network sectors—can later be exploited for hacking, infiltration, intelligence monitoring, and control purposes,” he told The Epoch Times via email.

“Western countries talk about their ‘risk management’ of Huawei contracts, but they are getting in way over their heads since, in certain high technology areas, such as artificial intelligence and quantum computing, including security, China is far more advanced than the UK.”

Bunker said the United States isn’t overstating the threat that China’s Huawei represents, given the regime’s “direct hostility to the liberal democratic form of governance.”

He said the move would “undermine the UK’s long-term digital sovereignty” with China getting the better end of the deal in terms of intelligence.

“The UK had better heed this warning,” Bunker added.

Britain’s decision also goes well beyond letting the “fox guard the henhouse,” according to Bunker.

“[It] instead provides the ‘fox’ the contract to build components of it and embed secret entrances into it,” he said. “Instead of losing a chicken or two now, a wholesale slaughter is being orchestrated for the future,” Bunker said.

Huawei is classified as a “high-risk vendor” by the UK, meaning that it will be excluded from the sensitive core where data is processed, and barred from all critical networks and sensitive locations, such as nuclear sites and military bases. As a high-risk company, its involvement would be capped at 35 percent.

Washington has repeatedly warned that Huawei—founded in 1987 by a former engineer of the Chinese regime’s People’s Liberation Army—is an extension of the Chinese state and that it assists Chinese intelligence in stealing secrets. Huawei denies the allegations.

Any impact the move would have on the broader relationship between London and Washington was downplayed.

“I am very confident that our two nations will find a way to work together to resolve this difference,” Pompeo said, adding that the Five Eyes intelligence alliance would remain.

Pompeo said that the “special relationship,” a term used to describe the close Anglo-American alliance, remains in good health and that he wanted to prioritize a post-Brexit trade deal with Britain.

Pompeo told reporters that the United States is trying to make the case to every country in the world “that we think putting Huawei technology anywhere in your system is very, very difficult to mitigate and, therefore, not worth the gamble.”

“But as we move forward together to make sure that next generation of technology is right, is secure and operates under a Western set of values and system, we’ll get to the right place,” he said.

The United States has been lobbying European allies to bar Huawei over concerns it could be compelled to help with electronic eavesdropping, after Beijing enacted a 2017 law that forces Chinese organizations to cooperate with national intelligence. U.S. officials also worry that 5G networks would rely heavily on software, leaving them open to vulnerabilities, and have repeatedly warned they would have to reconsider intelligence sharing with allies that use Huawei.

Huawei isn’t expected to greatly affect negotiations on a post-Brexit free-trade deal that Britain is counting on after exiting the EU.

President Donald Trump has pledged that the United States and the UK will negotiate a major free-trade deal as soon as Brexit is complete, and officials have already begun discussions on the plan.

Huawei also denied a report on Jan. 29 that alleged the German government was in possession of evidence that the company had cooperated with Chinese intelligence.

“Huawei Technologies has never, and will never, do anything to compromise the security of networks and data of its customers,” the Chinese company said, in response to the report in the Handelsblatt business daily.

The Handelsblatt report cited a confidential foreign ministry document as a “smoking gun” that showed Chinese companies were unsafe partners for building next-generation 5G mobile networks. The intelligence was shared by U.S. officials.

Huawei is currently the world’s biggest producer of telecom equipment, with The Wall Street Journal reporting that its soaring growth is the result of $75 billion in state subsidies, which has helped the company undercut many competitors on price. Britain has argued that excluding Huawei would have delayed its 5G rollout and cost consumers more.

U.S. officials this year have increasingly spoken out about countries “opening their arms” to Chinese companies for key infrastructure, such as artificial intelligence and 5G.

A number of U.S. lawmakers have expressed disappointment with the UK’s decision, with several calling for a review of its intelligence-sharing with Britain.

“Allowing Huawei to … build the U.K.’s 5G networks today is like allowing the KGB to build its telephone network during the Cold War,” Sen. Tom Cotton (R-Ark.) wrote in a statement.

“The Chinese Communist Party will now have a foothold to conduct pervasive espionage on British society and has increased economic and political leverage over the United Kingdom.”

Sen. Marco Rubio (R-Fla.), in a previous email to The Epoch Times, said the “misguided” decision ignores the “considerable expenditure required to mitigate the risk of Huawei’s involvement.”

“While Chinese subsidies lower the initial price tag of Huawei, the long-term costs to security and in allies’ trust are high,” Rubio said, adding that the United States should reevaluate economic and intelligence cooperation with Britain.

Sen. Mark Warner (D-Va.), vice chairman of the Senate Intelligence Committee, said in a statement that he was “disappointed” by the decision, adding that the United States remained committed to working with its allies such as the United Kingdom to build alternatives to Huawei.

“Here’s the sad truth: our special relationship is less special now that the UK has embraced the surveillance state commies at Huawei,” he said in a statement. “During the Cold War, Margaret Thatcher never contracted with the KGB to save a few pennies.”

Epoch Times reporter Cathy He, The Associated Press, and Reuters contributed to this report.