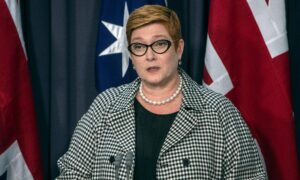 Australian Prime Minister Scott Morrison (L) listens to US Secretary of State Mike Pompeo (R) as US Vice President Mike Pence (C) looks on during a luncheon at the State Department in Washington, DC on September 20, 2019. ( ERIC BARADAT/AFP via Getty Images)
Australia

Australian Prime Minister Scott Morrison and U.S. Secretary of State Mike Pompeo spoke on a call on Jan. 18, affirming the unbreakable bond between the two countries.

The U.S. secretary of state’s spokesperson said in a statement that the two talked about their commitment to continue working together to strengthen and broaden the U.S.-Australia alliance.

Pompeo thanked Morrison for his unwavering support in promoting the two nations’ shared values of democracy, human rights, the rule of law, and the common strategic interests, even in the face of economic threats from the Chinese regime.

They also noted the importance of the Quad alliance’s efforts on making the Indo-Pacific region more free and open. The alliance, which comprises the United States, Australia, Japan, and India, share democratic values and are concerned about China’s security strategy.

Morrison said in an interview that he was pleased to speak with Pompeo as they have closely worked together over the last many years.

“The cornerstone of that [relationship] has been an understanding of just how important Australia and the United States are to each other,” Morrison said.

Pompeo staunchly defended Australia when the Chinese regime attacked the Morrison government for calling for an independent probe into the origins of the CCP (Chinese Communist Party) virus, commonly known as the novel coronavirus.

Treasurer Josh Frydenberg also thanked his American counterpart, Secretary of Treasury Steven Mnuchin, in a recent Twitter post for their partnership, and wished him well for the future.

Thank you @stevenmnuchin1 for the terrific partnership we have shared in our respective roles working to advance the economic interests of our two nations.

It was good to talk to you this morning, you have been a great friend & I wish you all the very best for the future. pic.twitter.com/zKj0LTkUvn