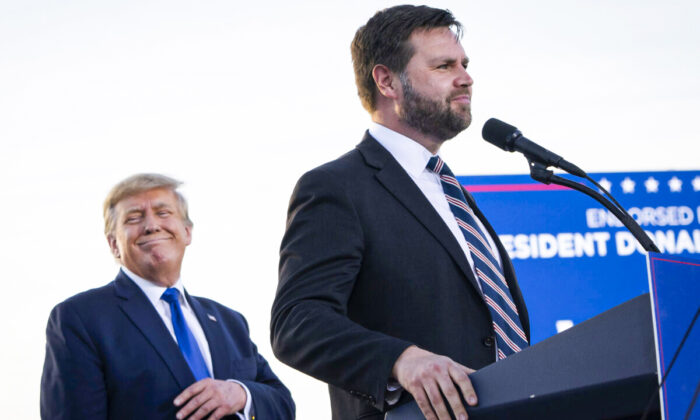 Former president Donald Trump (L) listens as J.D. Vance, a Republican candidate for U.S. Senate in Ohio, speaks during a rally hosted by the former president at the Delaware County Fairgrounds in Ohio on April 23, 2022. (Drew Angerer/Getty Images)
2022 Midterm Elections

Donald Trump’s endorsement of J.D. Vance is having a powerful effect in the Ohio GOP U.S. Senate race.

In less than two weeks, Vance has climbed from a 5.4-point deficit to Josh Mandel and surged to a commanding 22-point lead, according to a poll conducted by Fabrizio, Lee & Associates and first published by Breitbart News on April 28.

The survey was commissioned by pro-Vance PAC Protect Ohio Values and conducted from April 25 to April 26 among 800 likely Republican primary voters.

Among the respondents who are told that Trump has endorsed Vance in the race, the “Hillbilly Elegy” author and venture capitalist is perched atop the field with 39 percent support.

The margin of error is +/-3.46 points, and 13 percent of those surveyed remain undecided.

“If the primary was held today, we would be the winner,” Vance said at a No BS Tour town hall in Centerville, Ohio, on April 28. “We still have five days to go, so it’s important to sprint to the finish line.”

According to the new poll, when likely Republican primary voters are not aware of the Trump endorsement, Vance leads with 31 percent, followed by Mandel (19 percent), Dolan (12 percent), Gibbons (12 percent), and Timken (8 percent). Those who are undecided account for 17 percent of voters questioned.

Vance said his campaign started to gain momentum on March 18, when Gibbons and Mandel engaged in an on-stage altercation during a debate.

“It’s hugely powerful,” Vance said about Trump’s stamp of approval. “I think it’s the only endorsement in politics that actually moves votes, and it moves a lot of votes, especially here in Ohio.”

Polls over the past two weeks show that Vance’s assessment is correct.

The poll also showed that 54.9 percent of respondents, who are likely GOP primary voters, are either “more likely” or “much more likely” to vote for a candidate endorsed by Trump, who announced he was backing Vance hours later.

On April 27, Fox News published the first independent poll since Trump’s endorsement of Vance. In that poll, Vance claimed a five-point lead at 23 percent compared to Mandel’s 18 percent.

Gibbons (13 percent), Dolan (11 percent), and Timken (6 percent) finished in the distance with 25 percent of the respondents saying they are undecided.

Vance is surrounded by Trump allies in the final days before the May 3 primary. On April 28, he is joined on campaign stops by former Trump campaign adviser and broadcaster Steve Cortes.

“For too long, conservative voices have been silenced and weaponized by the mainstream media and liberal elites,” Gaetz said. “J.D. Vance is the only candidate not afraid to stand up against the establishment and make the voices of everyday, working-class Ohioans heard in Washington.”

Vance is “the only [former] president Trump-endorsed candidate for the U.S. Senate in Ohio” and is “a true America First patriot who puts people over politicians and believes in taking action rather than just talking a big game on television,” Greene said.

On May 1 and May 2, Sen. Josh Hawley (R–Mo.) and Turning Point Action Founder Charlie Kirk will campaign with Vance in Cuyahoga Falls, Westlake, and Dublin; while Kirk will also appear with Vance in Circleville and Mason.

Mandel will be joined by Sen. Ted Cruz (R–Texas) at “Faith and Freedom” rallies in churches in Kettering on April 29 and in Toledo, Columbus, and Lebanon on April 30.

Cruz endorsed Mandel on April 4 when Mandel sat atop the polls.

“As our nation faces crisis after crisis under Joe Biden, our country needs conservative fighters to stand up to the radical Democrats who want to exploit these problems to deliver socialism to America.

“That’s why I am supporting Josh Mandel for U.S. Senate,” Cruz said in a statement. “A United States Marine, Josh is a proven fighter for our American way of life, a champion for the unborn, and a stalwart advocate for our religious liberties.”

Club for Growth, a conservative organization that helped elect Cruz in 2012, is supporting Mandel.

Mandel has centered his campaign on churches by hosting “Faith and Freedom” rallies across Ohio. In March, a group of 114 clergy members wrote an open letter endorsing him.

“The mantra of our campaign is pastors over politicians,” Mandel said. “I’m more interested in earning the support and endorsements of pastors, Christian activists, and citizens who are Christians than getting approval from politicians.”