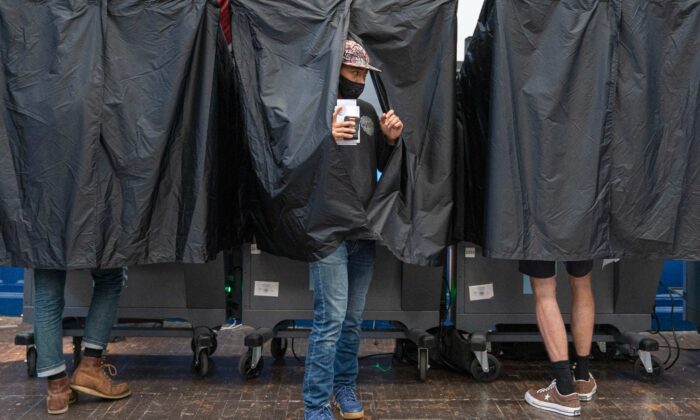 A certified poll watcher was denied entry to a voting site in Philadelphia on Election Day, according to Mike Roman, the Trump campaign’s director of Election Day operations. The issue was eventually resolved by city officials and the man was admitted to the facility.

In a video posted to Twitter by Will Chamberlain, editor-in-chief of political magazine Human Events, a pair of poll workers appeared to tell a man that his poll watcher certificate wouldn’t grant him access to the Philadelphia polling place.

A poll watcher in Philly was just wrongfully prevented from entering the polling place#StopTheSteal pic.twitter.com/iJTFtRk0Id

“I have a citywide watcher’s certificate,” the man can be heard saying in the video. In a follow-up post, Chamberlain identified the man as Gary Feldman, whose certificate stated that it “authorizes the individual to watch in any ward/division in Philadelphia.”

After presenting the certificate, Feldman was told repeatedly that the document “is not for this location.”

“Call the police, do it,” the male poll worker told Feldman. “If you legal, call the cops.”

The man was later allowed in the polling site, Kevin Feeley, a spokesman for the Philadelphia City Commissioners, told ProPublica.

“The mistake was corrected, and the guy was admitted,” he said, claiming it was an isolated incident.

Meanwhile, Roman, a veteran Republican operative, shared Chamberlain’s post on the morning of Nov. 3, alleging that similar episodes were occurring across the city.

“DEMOCRAT ELECTION OFFICIALS BANNING TRUMP POLL WATCHERS IN PHILLY,” Roman wrote. “This is happening all over the City. The steal is on!”

🚨DEMOCRAT ELECTION OFFICIALS BANNING TRUMP POLL WATCHERS IN PHILLY. This is happening all over the City. The steal is on! https://t.co/sWS9lXL5vh

The Office of the Philadelphia City Commissioners didn’t immediately respond to a request from The Epoch Times for comment.

Roman also reported what he alleged to be illegal campaigning activities at a number of polling places. In another Twitter post, Roman shared an image of a man purportedly distributing pro-Democrat flyers to voters waiting in line to cast their ballots. The flyers appeared to be instructing voters to vote for Democratic candidates for various state and federal offices.

ILLEGAL campaigning INSIDE of a polling location in Philly. Man in blue is handing out DEM literature to voters IN LINE TO VOTE. This is why DEMS are keeping TRUMP WATCHERS OUT. They are STEALING it! This needs to STOP! pic.twitter.com/qnJ3D8o2ie

According to the National Conference of State Legislatures, every state has some form of restriction on electioneering near polling places when voting is taking place. In Pennsylvania, state law prohibits bringing campaign materials, including signs, banners, and literature within ten feet of polling places. Activities that aim to influence or persuade voters are also forbidden in that range.

The Philadelphia District Attorney’s Office didn’t immediately respond to an inquiry by The Epoch Times about the allegations by Roman.

In 2016, then-candidate Donald Trump won the Keystone State by a margin of 0.7 percentage points, securing its crucial 20 electoral college votes.