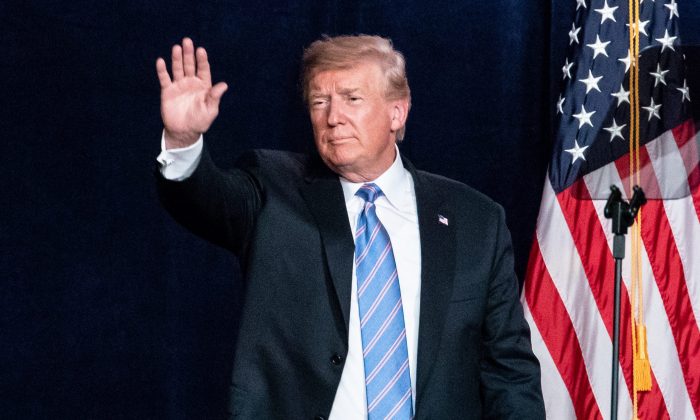 Most Britons support President Donald Trump’s visit to the United Kingdom, a new poll has found.

The poll comes as Air Force One, the plane carrying the president and his staff, touched down in the UK on July 12. There, he’ll meet with Prime Minister Theresa May and later, Queen Elizabeth II. Reports have indicated that his visit will be met with protests, prompting a warning from the U.S. Embassy in London advising Americans in the country to “keep a low profile” in case the demonstrations turn violent.

The poll is “noticeably higher than in previous YouGov polls that asked about a state rather than a working visit,” YouGov wrote in an analysis.

“The vast majority of those who think the government should be working with Donald Trump support the UK visit, regardless of their own views towards him,” the pollsters wrote. They added that as a whole, polled Britons have a negative view of Trump, but regarding his visit to their country, it can “broadly be described as negative but pragmatic.”

It comes after London Mayor Sadiq Khan repeatedly called for the president’s visit to the country to be canceled. And more than 50,000 people have signed up to demonstrate in London on July 13, Reuters reported.

After the president and First Lady Melania Trump arrived at Stansted Airport, Trump said he was “fine” about any protests during his visit. Britons, he said, “like me a lot,” the BBC reported.

May has said Trump’s visit is an opportunity to boost trade links between the United States and the UK amid Britain leaving the European Union. She also said that it’s an opportunity to strengthen cooperation on security. Once the UK leaves the EU, May said, “there will be no alliance more important in the years ahead.”