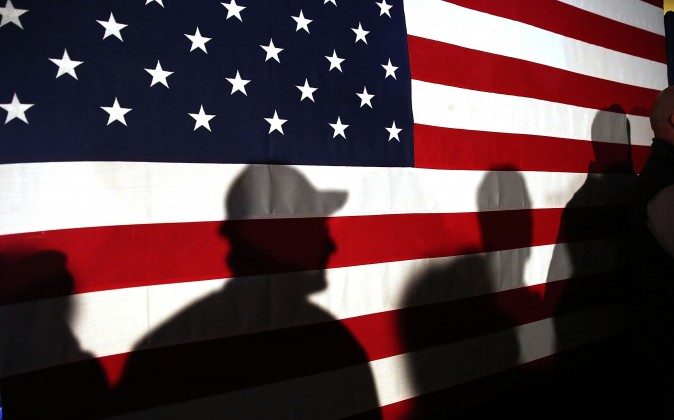 Shadows are reflected on an American Flag as people line up to speak with Ohio Governor and Republican presidential candidate John Kasich on Feb. 11, 2016, in Myrtle Beach, S.C. (Spencer Platt/Getty Images)
US

When used for retrieving intel from terror suspects, 63 percent of Americans give torture the thumbs up.

The online poll, conducted from March 22 to March 28 by Reuters/Ipsos, paints the image of a country on high alert after terror attacks have ripped through Europe and much of the Middle East.

It asks just three questions, but indicates a lot about the impact of terrorism on an American’s daily life.

Polls from other agencies indicated Americans were about 50/50 on the issue of torture.

At it’s conclusion, the poll shows 25 percent of Americans feel the use of torture is “‘often’ justified against suspected terrorists to obtain information about terrorism,” while 38 percent say it’s “sometimes” justified—15 percent say it should never be used.

In recent years, polls from other agencies indicated Americans were about 50/50 on the issue of torture, but the rest of the world showed higher percentages for agreeing with torture, especially areas like India, Kenya and Nigeria where terrorism is more prevalent.

To tie it in with politics—82 percent of Republicans sided with “often” or “sometimes” justified, compared to 53 percent of Democrats.

The rest of the world showed higher percentages for agreeing with torture.

Similarly to agreeing with torture usage, roughly two-thirds of responders said they’re expecting a terrorist attack in the United States within the next 6 months.

Grinning Hostage Poses in a Photo With Hijacker Before Being Released

Following the the poll, Reuters released the full poll data report, which contained a number of questions not shown in the graph.