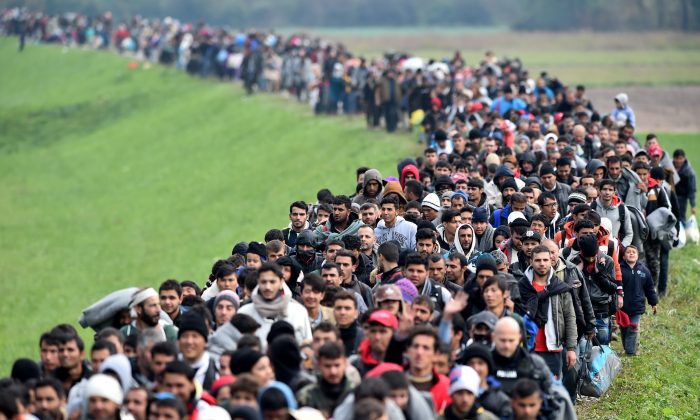 Migrants are escorted through fields by police as they are walked from the village of Rigonce to Brezice refugee camp in Rigonce, Slovenia, on Oct. 23, 2015. (Jeff J. Mitchell/Getty Images)
US

A new survey of Democratic voters believe Muslims are worse off in the United States than Christians are in the Muslim world—in contrast to what Republican and independent voters believe.

Some 62 percent of likely voters believed that most Christians living in Muslim-majority nations are “treated unfairly because of their religion,” Rasmussen Reports said. About 17 percent disagree and 21 more are undecided.

In comparison, 39 percent feel Muslims living in the United States are treated unfairly due to their religion.

But around 56 percent of Democrats polled believe that Muslims in the United States are treated unfairly, the survey revealed. Only 22 percent of Republicans and 39 percent of unaffiliated voters felt the same as Democrats in comparison.

And around 47 percent of Democrats think most Christians are mistreated in Muslim-majority nations. In comparison, 76 percent of Republican and 64 percent of unaffiliated felt the same, the poll found.

“Most voters agree that Christians living in Muslim-majority countries are mistreated for their religion. But Democrats are more likely to think Muslims are mistreated in America than to think Christians are persecuted in the Islamic world,” said Rasmussen Reports in a new survey released on Tuesday.

The poll comes as President Donald Trump said the United States will prioritize Christian refugees over others because, as he told CBN late last month, they’re “horribly treated.”

“If you were a Muslim you could come in, but if you were a Christian, it was almost impossible and the reason that was so unfair—everybody was persecuted, in all fairness—but they were chopping off the heads of everybody, but more so the Christians. And I thought it was very, very unfair. So we are going to help them,” he said.

Some 99 percent of Syrian refugees admitted into the country were Muslim and less than 1 percent were Christian, the Pew survey found.