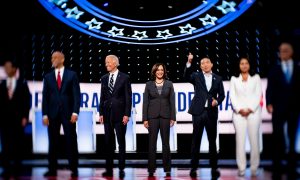 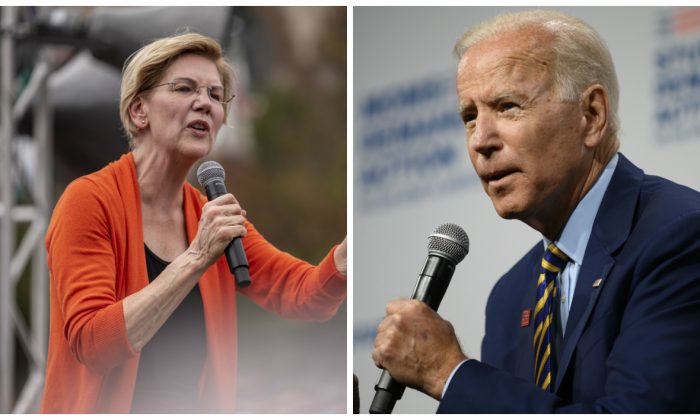 Monmouth University conducted the survey by telephone from Aug. 16 to Aug. 20. Eight hundred adults answered the call, but the Democratic results reflect only 298 registered voters who said they are Democrats or leaning toward the Democratic Party. Because of the small sample size, the survey has a margin of error span of 5.7 percent.

Compared to Monmouth’s June poll, Biden’s percentage dropped by 32 percent versus increases for Sanders (14 percent) and Warren (15 percent). Each had about 20 percent support in the latest survey.

Biden saw drops among nearly every group, including white Democrats, minority voters, voters with and without college degrees, and both men and women.

Many of those people shifted to Sanders or Warren.

“The main takeaway from this poll is that the Democratic race has become volatile. Liberal voters are starting to cast about for a candidate they can identify with. Moderate voters, who have been paying less attention, seem to be expressing doubts about Biden. But they are swinging more toward one of the left-leaning contenders with high name recognition rather than toward a lesser known candidate who might be more in line with them politically,” said Patrick Murray, director of the independent Monmouth University Polling Institute, in a statement.

Murray noted: “It’s important to keep in mind this is just one snapshot from one poll. But it does raise warning signs of increased churning in the Democratic nomination contest now that voters are starting to pay closer attention.”

“Biden’s drop in support is coming disproportionately from later states that have less impact on the process. But if this trend continues it could spell trouble for him in the early states if it undermines his claim to being the most electable candidate. This could benefit someone like Harris, who remains competitive in the early states and could use a strong showing there to propel her into the top tier. Based on the current data, though, Warren looks like the candidate with the greatest momentum right now,” said Murray.

Warren has drawn crowds of thousands in Minnesota and Washington this month. Her campaign estimated the crowds to be 12,000 and 15,000 attendees, respectively, but The Epoch Times hasn’t been able to independently confirm those estimates. Officials with the St. Paul Fire Department and St. Paul Police Department could not provide estimates to Epoch Times, nor could Macalester College, where the event was held. Breitbart estimated the crowd in Minnesota to be 6,000 at most.

South Bend, Indiana Mayor Pete Buttigieg, businessman Andrew Yang, former Obama administration cabinet secretary Julian Castro, former Texas Rep. Beto O’Rourke, and author Marianne Williamson all received support of two percent or more; the remaining 13 candidates had one percent or less. The poll was the first poll that showed Williamson with two percent or more but she lacks the three others she needed to get on the September debate stage, per requirements from the Democratic National Committee.

As of now, it looks like only 10 candidates made the stage. Both billionaire Tom Steyer and Rep. Tulsi Gabbard (D-Hawaii) remain close but have not quite met the thresholds.

Another poll out recently, an Economist/YouGov survey (pdf) of some 1500 adults, saw Biden still in front.

When asked who their first choice would be if the Democratic primary was held today, 22 percent of respondents said Biden; 19 percent answered Sanders, and 17 percent answered Warren. No other candidate had double digits and 12 percent of respondents said they were not sure. This question had responses from 559 voters who said they will be voting in the Democratic primaries.

When people could select more than one candidate when asked which candidates they’re considering voting for, Warren was the top with 50 percent of the respondents voting for her, versus 45 percent for Biden, 44 percent for Sanders, 35 percent for Harris, and 29 percent of Buttigieg. That question saw 561 people responding.

The other four most recent polls—from CNN, Politico/Morning Consult, Fox News, and The Hill/HarrisX—all saw Biden on top by at least 10 percentage points.