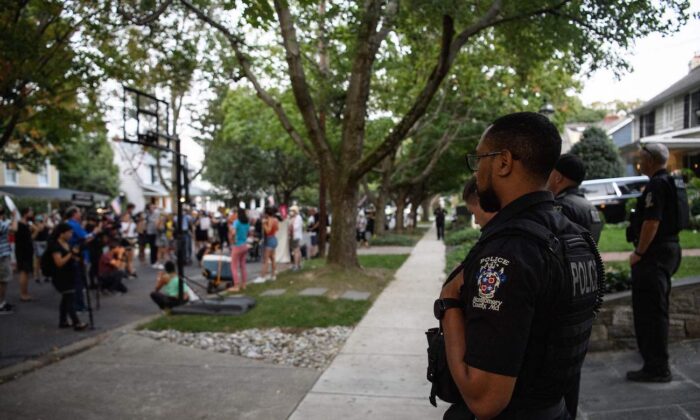 An overwhelming majority of Americans believe publishing the home addresses of Supreme Court justices and demonstrating at their homes isn’t an acceptable way to protest the upcoming ruling on abortion precedent Roe v. Wade.

According to the poll by The Trafalgar Group, 75.8 percent of American voters believe that publishing the private residential addresses of the five conservative Supreme Court justices, who reportedly support overturning the seminal 1973 legal precedent, isn’t an acceptable way to protest the high court’s pending decision regarding Roe v. Wade.

Meanwhile, 15.9 percent of respondents believe that publishing such addresses is acceptable, while 8.3 percent said they were unsure.

The draft majority opinion in Dobbs v. Jackson Women’s Health Organization was leaked, and published by Politico on May 2. The ruling would uphold Mississippi’s Gestational Age Act, which allows abortion after 15 weeks’ gestation only for medical emergencies or severe fetal abnormality. It’s unclear when the final version of the Dobbs opinion will be formally issued by the high court.

There have been protests nationwide, including at houses of worship on Mother’s Day and at the homes of Supreme Court justices, whose addresses were publicized by protest organizers. The White House has refused to condemn both the unprecedented leak of the high court’s work product and the targeting by demonstrators of justices at their homes. Legal experts also point out that Section 1507 of Title 18 of the U.S. Code makes it an offense to protest near the home of a judge with the intent of influencing “the discharge of his duty.”

“These numbers make it clear that the Biden administration’s refusal—both to forcefully condemn these illegal demonstrations and to enforce laws protecting justices of the United States Supreme Court—is wildly unpopular with voters,” Meckler said in a statement.

Convention of States Action is leading an effort to have the states call for a new constitutional convention that would produce amendments which, if passed, would restrain the powers of the federal government.

“While this poll cannot measure the outrage that Americans feel because of this politically-driven double standard of injustice, in which supporters of a radical leftist agenda can essentially do whatever they want while good citizens suffer, voters’ outrage will be expressed at the polls in November,” Meckler said.

“From the riots in our cities they encouraged and supported, to refusing to condemn protesting at the private homes of Justices of the United States Supreme Court, Democrats are out of step with the vast majority of Americans, regardless of political party.”

The poll also discovered that 52.3 percent of American voters believe the Biden administration’s refusal to condemn abortion activists for publishing the justices’ home addresses and urging protests at their homes will encourage protests to become potentially unlawful or violent.

On the same question, 27.5 percent of voters indicated the administration’s failure to condemn the activists would have no effect on the demonstrations. At the same time, 10 percent of voters believe it will discourage protests from becoming potentially unlawful or violent, while 10.2 percent are unsure.

The poll of 1,082 likely general election voters was conducted from May 6 to May 8.