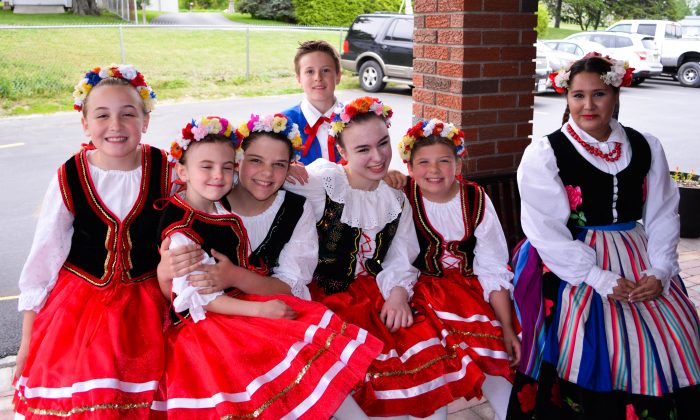 Pokolenie dancers at the Polish Legion of American Veterans in Pine Island on May 21, 2016. (Yvonne Marcotte/Epoch Times)
New York

PINE ISLAND—Jenna Greenhill, 13, danced a high stepping polka to several musical numbers by the John Stevens Doubleshot band and along the way did her part to raise money for a good cause. As the evening wore on, Jenna passed out purple ribbons to remind guests of the need to find a cure for pancreatic cancer.

Her mother, Suzanne Majewski Greenhill, coordinated the Pancreatic Cancer Benefit Polka dance on May 21 at the Polish American Veterans lodge in Pine Island.

Josephine Kozak and her husband Mario Kozak drove two hours from Flemington, New Jersey to take part in the fundraiser. Her sister suffers from the disease so she came to support the cause, “and because it’s a polka dance. It’s a good thing to put the two together,” she said.

About 110 guests filled the dance hall, clapped to the music, and danced waltzes, polkas, and schottisches. The event had homemade food like Polish sausage and other delights from Quaker Creek store in Pine Island that specializes in home made meats and delicatessen products.

The highlight of the evening was a rousing performance by the Pokolenie Dancers, a Polka dance ensemble formed in 2012.  “We always go to dances so we can perform or we can just dance and have fun,” Jenna, who is a member of the group, said. They perform traditional folk and modern polka, according to their website. Dancers range in age from 7 to 38.

Joseph Morgiewicz choreographs the dance numbers and co-directs with Majewski Greenhill. The group performs throughout New York, New Jersey, and Pennsylvania and has performed with polka greats, including 18-time Grammy winner Jimmy Sturr.

Majewski Greenhill said Pine Island has a large population of Polish Americans. “The area has a very strong Polish background.”

John Stevens’ Doubleshot band had five people from a town near Wilkes-Barre, Pennsylvania. He says he plays all the traditional polka favorites as well as original music. “We try to do a mixture for the crowd with some of our own music, but we also give them traditional things that they know and love,” said John Stevens.

Pokolenie dancers regularly perform at veterans hospitals in the region including Castle Point and Montrose. The group took to wearing of the green at the Mid-Hudson St. Patrick’s Day Parade where they were honored as Most Outstanding Unit Overall.


The Mayo Clinic describes pancreatic cancer as difficult to cure. The disease spreads rapidly and is seldom discovered in the early stages, “a major reason why it’s a leading cause of cancer death. Signs and symptoms may not appear until pancreatic cancer is quite advanced and complete surgical removal isn’t possible,” the website says.

Majewski Greenhill’s mother passed away from the disease in 2014 and, “I just took over her fight,” she said.