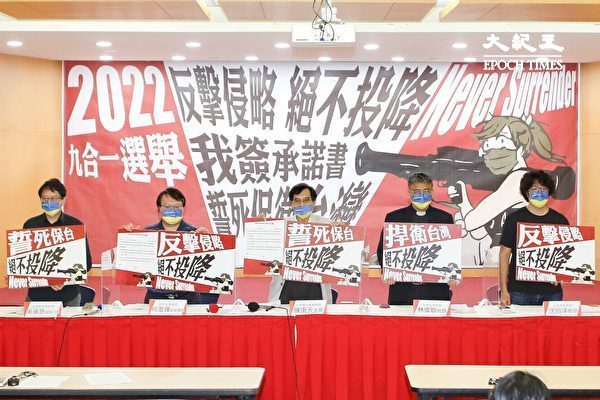 Several Taiwanese civil organizations called on all candidates for the November nine-in-one elections to sign the "Defend Taiwan and Never Surrender" pledge in a joint press conference in Taipei on Sept. 5, 2022. (Shih-chieh Lin/The Epoch Times)
Taiwan

Politicians Should Pledge Not to Surrender or Capitulate to CCP: Taiwanese Civil Groups

A number of Taiwan’s civil groups are urging candidates for upcoming local elections to pledge to “defend Taiwan, and never surrender.”

Facing escalating military coercion by the communist regime and infiltration by the Chinese Communist Party (CCP) on the island, local civil societies held a joint press conference in Taipei, urging candidates to pledge their determination to defend Taiwan.

Taiwan’s local elections, known as nine-in-one elections, with people voting for nine categories of local officials and councilors, will be held on Nov. 26.

In the conference on Sept. 5, candidates from all political parties, particularly candidates for mayor and county commissioner, were called on to sign the pledge of “no surrender and no capitulation.”

The results will be made public for voters’ reference on Nov. 11.

Organizers indicated that the CCP’s military threat is an issue faced by all political parties, from central to local.

The participants proposed a pledge in which candidates promise to strengthen “the will to resist,” and commit to improving “the civil defense system” throughout Taiwan.

The candidates should “resist the CCP’s infiltration,” and will not “advocate, advertise, lobby, or support the argument of surrender, non-resistance, or negotiation with the enemy via speech, action or any other forms.”

The candidate should “vow to defend Taiwan’s security, fight back against aggression, and never surrender, in face of invasion, coercion, threat, or conflict from China,” according to the pledge.

Richard Chen, World United Formosans for Independence chairman, said the issue is not when the CCP will invade Taiwan, but that Taiwan should be ready, in light of escalating intimidation by the CCP, military coercion, and the invisible war conducted by internet trolls and CCP fellow travelers on the island.

Rev. Lin Wei-lien, representing the Presbyterian Church in Taiwan, said some politicians still hold false hopes for China, and choose to ignore the atrocities in Tibet, Xinjiang, and Hong Kong under CCP rule. With two months before the elections, Lin said it is time for voters to be clear on whether candidates would compromise and capitulate to the CCP.

Cheng-hui Ho, deputy secretary general of the Taiwan National Security Association, said the autocratic CCP is the ultimate threat to Taiwan and regional security. Its claim of sovereignty has never been about the security and value of world order but is a false narrative based on historical sovereignty.

The regime’s core is aggression and persecution of an “expansionary nationalist” nature, he said.

Defeatism in the Name of Peace

Taiwan New Constitution Foundation deputy director Cheng-en Sung added that any ideas of appeasement and a peace agreement are equivalent to promoting surrenderism or defeatism.

“Take the latest white paper on Taiwan as an example,” Sung said, citing the regime’s recent white paper, which made it clear that Taiwan is faced with either “peaceful reunification” or “the use of force.” However, Sung stressed that “Peace talks under threat of force are no negotiations, and a coerced peace is nothing but submission; it’s surrender.”

It is important that local officials understand and be aware of the CCP’s threat, Shen said. Any policy mistake at the local level could “compromise the logistics of the nation’s armed forces,” he added.

The CCP’s fifth column infiltration of local offices is a particularly serious matter of national security, Shen said, and should be a priority for all candidates. He encouraged candidates to sign the pledge as a starting point.

A Matter of Credibility

Taiwan Association of University Professors vice president Li-fu Chen said that everyone, from the president to local officials, should sign the pledge of no surrender because it represents the will of the citizens.

Surrender and capitulation by officials are equivalent to “the most serious betrayal of the duty and the sacred trust of the people,” he said.

Chen emphasized that although this commitment is not legally binding, it speaks to the character and dignity of candidates for public office. Further, those who sign the pledge will undoubtedly face consequences from the CCP: potentially being barred from travel to China, jail-time, or losing the opportunity to serve as CCP agents.

The pledge will help Taiwanese voters “identify opportunistic politicians” and “improve the effectiveness of democratic defense mechanisms,” he added.

Min-chou Wu contributed to this report.