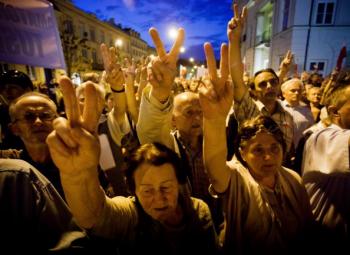 People take part in a demonstration in front of a cross erected in front of Warsaw's presidential palace after the April air crash death of president Lech Kaczynski, on August 10. Supporters and relatives of the late president, including his twin brother want the cross to remain as a memorial to victims of the April 10 air crash. (Wojtek Radwanski/Getty Images )
Europe

Tom Ozimek
Reporter
Tom Ozimek has a broad background in journalism, deposit insurance, marketing and communications, and adult education. The best writing advice he's ever heard is from Roy Peter Clark: 'Hit your target' and 'leave the best for last.'
View profile
Follow
biggersmaller
Print
WARSAW, Poland—Public protests and scuffles with the police over attempts to move a large wooden cross from outside the Presidential Palace in Warsaw have lifted the lid on simmering social and political tensions in Poland.

Barely four months after a plane crash killing the president brought the nation together, the legacy of the tragedy has become the focal point for what is keeping it apart.

At the heart of the debate is the fate of a plain, wooden cross erected in the wake of the Smolensk plane crash tragedy of April 10, that killed president Lech Kaczynski, his wife, and 94 other top Polish officials and leaders.

The cross is the centerpiece of an impromptu memorial of flowers, wreaths, pictures, letters, candle lanterns, and other symbols of national grief erected by a Polish Boy and Girl Scouts organization in front of the Presidential Palace. The memorial has always been considered temporary, but what happens to it next has exposed deep political divisions.

The cross bore witness to an extremely tight battle to succeed Kaczynski in the Presidential Palace. The race was run between the late president’s twin brother and acting president, Bronislaw Komorowski.

Once victorious, Komorowski announced plans to move the cross to “a more appropriate setting,” the church of St. Anne in Warsaw.

A statement from the Chancellery of the President said, “the new location for the cross, arrived at through discussion and dialogue, will enable everyone to remember all those who perished in the Smolensk catastrophe in an atmosphere of appropriate solemnity and concentration.”

The statement was released after deliberations involving the Chancellery, representatives of the Warsaw Metropolitan Curia (Catholic Church officials), the two Boy and Girl Scouts organizations in Poland, and officials from the Church of St. Anne.

The losing candidate, the bereaved late president’s twin Jaroslaw Kaczynski, has called for a permanent monument in front of the Presidential Palace, specifically commemorating his brother and other victims of the air disaster.

The issue has been a top news story for weeks. According to many commentaries by Polish media, the cross has become a reflection of the power play between the ruling Civic Platform party, and the Kaczynski brothers’ Law and Justice party. Civic Platform, the argument goes, is reluctant to strengthen the legacy of the late president and, by extension, the hot-on-their-heels opposition party.

The relocation of the cross was supposed to take place amidst an elaborate ceremony starting Aug. 3, including a lengthy pilgrimage that would take the cross to various locations of religious significance in Poland.

However, the commemorative arrangements included no fixed plans for a permanent memorial at the Palace.

In the absence of such a commitment, the planned grand ceremony was foiled by “defenders of the cross” who put up such determined resistance that the authorities backed down and left the cross untouched.

The protesters had set up a permanent camp outside the memorial site as soon as plans to move the cross were announced.

Those committed to preventing the cross from being moved argue that they will allow this to happen only if the government commits on paper to building a permanent monument in its place.

Proponents of leaving the cross where it is—dubbed “defenders of the cross” by local media—are practically without exception conservative Catholics, who happen to constitute the electoral base of the late President’s political party, Law and Justice.

The Law and Justice party openly stands for Catholic values and their political victory is seen by many of its supporters as on par with a victory for Catholic values, in the face of ever-greater secularization, accelerated by Poland’s relatively recent accession to the European Union.

Supporters of Komorowski’s plan to move the cross to St. Anne’s church, are seen as proponents of the secular state, where crosses belong at churches, not in front of government institutions.

Last week, as a response to the apparent victory of the “defenders of the cross,” who managed to prevent its removal, a few thousand young people in the secular state camp demonstrated in the streets, demanding the cross be removed.

The Politics of Commemoration

Several days after the unsuccessful removal of the cross, a statement was issued from the Chancellery of the President, in which Komorowski announced a memorial would be placed at the Presidential Palace.

“It is something obvious—and not done as a political move or a political game or in anyone’s political interest—that all officials who perished in the Smolensk catastrophe, and, in particular the presidential couple, will be commemorated in the Presidential Palace,” Komorowski had stated.

A week later, a plaque was placed on one of the walls of the Palace, with a cross engraved on it and the following text:

“Here in this place, in the days of mourning following the Smolensk tragedy, which took the lives of 96 individuals—among them the President of the Republic of Poland Lech Kaczynski and his wife, as well as former President Ryszard Kaczorowski, beside a cross erected by boy and girl scouts, assembled numerous Poles united by pain and concern for the fate of the nation.”

The defenders of the cross were unconvinced by this gesture and persisted in their refusal to budge from the cross site. The authorities appeared unwilling to take the final step and remove them by force.

However, on Aug. 14, two days after the unveiling of the plaque, the protesters were finally removed by the police in order to clear the area for the next day’s Polish Army Day celebrations. Some protesters complied and some were forcibly removed.

Since last Saturday, the cross has been without ‘defenders,’ but the authorities also have not taken the opportunity to remove it. Only tourists and curious onlookers flow past the barricades, many stopping to take pictures and several television cameras are permanently stationed to be sure not to miss any breaking news.

The protesters have moved to the other side of police barricades, where a group of them persists, watching every move by the authorities. And the rest of the nation persists with its eye on every development, eagerly awaiting the play to reach its conclusion.

With additional reporting by Andrey Volkov