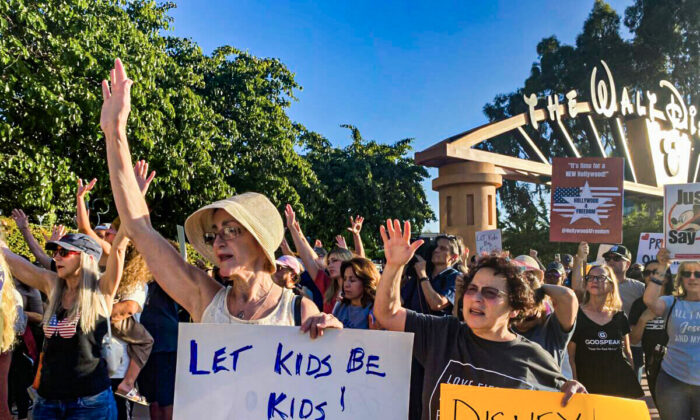 Protesters rally in opposition to The Walt Disney Company's stance against a recently passed Florida law outside of the company's headquarters in Burbank, Calif., on April 6, 2022. (Jill McLaughlin/The Epoch Times)
Economy

Executive teams of large U.S. corporations are becoming increasingly partisan, resulting in “a political polarization of corporate America,” according to a new study from the National Bureau of Economic Research. This polarization has implications for the values of firms as well, the study found.

While workplace diversity in recent years has received a lot of attention, particularly in relation to gender and color, political diversity is clearly moving in the opposite direction.

Historically, the workplace has been more politically diverse, offering opportunity for cross-party relationships compared to other settings, such as the family, neighborhood, or voluntary organizations.

But it’s no longer the case at the corporate leadership level, according to researchers from Boston College, University of Chicago, and Cornell University. They conducted their study by analyzing voter registration records for senior executives at S&P 1500 companies between 2008 and 2020.

In contrast to previous studies, the new study argues that voter registration data, rather than political contributions, is more reliable for inferring political preferences of executives.

Partisanship is defined by the researchers as the extent to which a single political party dominates political views within the same executive team. And they found that over the years, C-suites of public U.S. firms are increasingly dominated by one political party.

“More specifically, our measure of partisanship is the probability that two randomly drawn executives are affiliated with the same political party. We find a 7.7-percentage-point increase in the partisanship of executive teams over our sample period,” they wrote in a paper.

The rise in partisanship is mostly a result of executives’ increasing tendency to associate with those who share their political beliefs, according to the authors.

“Our results show executives who share the same political party are 34% more likely to work in the same firm,” they wrote.

The study also found that the majority of executives lean Republican.

“The average share of Democratic and Republican executives is 31.0% and 69.0%, respectively,” the paper stated.

Additionally, partisan division among executives is growing across states.

Only voter registration records from nine states, including California, Colorado, Illinois, Massachusetts, North Carolina, New Jersey, New York, Ohio, and Texas, were used to measure the political affiliation in the study. This is because many states limit access to voter registration data, the researchers noted.

Then, do shareholders benefit from the exit of CEOs who are politically misaligned?

To help answer this question, researchers analyzed abnormal stock performances around the resignation announcements of the executives. They observed trends that strongly indicate that the exits of politically mismatched leaders are detrimental to firm value.

“Hence, some aspects of the rising polarization among U.S. executives have negative consequences for firms’ shareholders,” the study concluded.

The authors also raised the question of whether governments should be worried about political discrimination in the workplace.

Traditionally, employment discrimination issues have centered on gender, ethnicity, sexual orientation, and age. In contrast, U.S. federal law and many state laws do not ban private firms from discriminating against employees based on political opinions.

One of the authors of the paper, Elisabeth Kempf, a faculty research fellow at the University of Chicago, said Democratic executives may have become more outspoken on progressive issues over the years.

She added that this is consistent with the notion that “maybe executives have become more outspoken on progressive issues or are more openly Democrat.”

Many businesses today don’t hold back when it comes to making public statements about current political events.

Large American companies, for example, have recently gotten involved in the abortion debate following the Supreme Court’s decision to overturn Roe v. Wade. A growing number of executives announced that they are changing their health insurance plans to pay for employees’ out-of-state abortions.

Political activism at the C-suite level can sometimes have negative effects on businesses, as witnessed in the example of the Walt Disney Company. The company lost its special privileges in Florida after Disney CEO Bob Chapek publicly criticized the state’s new Parental Rights in Education law that “prohibits classroom instruction on sexual orientation or gender identity in kindergarten through 3rd grade.”

The company’s share value has plummeted nearly 40 percent year-to-date partly because of the political conflict, becoming one of the top losers of Dow Jones Industrials this year.