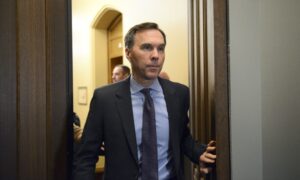 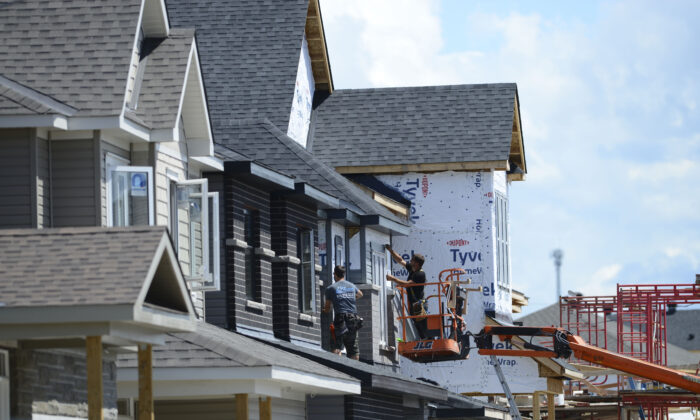 A new home is being built in a housing development in Ottawa on July 14, 2020. A key item during the election campaign is dealing with a crisis of unaffordable housing. (The Canadian Press/Sean Kilpatrick)
Canada

Increasing supply is a central focus, but policies to spur demand can be problematic, say analysts
By Rahul Vaidyanath

While the political parties may not agree on much, one general consensus is that Canada has a housing affordability crisis. But the country doesn’t have a one-size-fits-all national housing market, and certain parts of it didn’t become ridiculously unaffordable overnight. This represents a complicated predicament that has taken on significance in the election campaign.

Against this backdrop, analysts can see repercussions from implementing national housing policies and point out that it’s debatable what role the federal government should play.

Wendell Cox, urban policy expert at the Frontier Centre for Public Policy, believes the proposed approaches to encouraging home ownership could exacerbate the housing market quandary in the near term.

“Demand measures are likely to backfire,” he told The Epoch Times.

“When the provincial government imposes a ‘greenbelt’ around the entire metropolitan area, that creates a real problem,” he said, noting that home prices in urban centres surrounded by such a strip of land—whether left undeveloped or used for agriculture—tend to rise much faster than prices in places without greenbelts.

Thus, Cox says, there’s actually little the feds can do to fix the affordability problem other than pressuring provincial authorities to not constrain land use in this manner.

“When you allow housing prices to get out of control in the market, you’re also making people poor,” he said.

A surge in housing demand and a red-hot real estate market were to be expected given that the Bank of Canada cut its key interest rate to a historical low of 0.25 percent in March 2020 and the feds provided more than ample financial support to households amid the pandemic. Stephen Poloz, who oversaw the extraordinary actions as BoC governor at the time, said earlier this year that such an outcome was an acceptable trade-off to prevent greater economic damage.

The pandemic itself proved to be a catalyst for additional housing demand as more people worked from home and needed more space.

RBC’s national housing affordability measure—home ownership costs as a proportion of household income—hit 52 percent in the first quarter of 2021. This is the worst level in 31 years.

Home prices have gone up a record-breaking 17.8 percent for the year ending in July, based on the Teranet-National Bank House Price Index (HPI).

“We do not see prices decreasing in the near term, even though the gains over the past year are staggering,” according to an Aug. 19 Teranet-National Bank HPI statement.

“We have to be careful once we define demand tools, … you don’t want people to get more into debt,” Tal told The Epoch Times.

The NDP pointed out that the MLS benchmark home price has surged to $734,500 from $433,800 when Trudeau was first elected in November 2015—a 69 percent increase in less than six years.

The No. 1 problem has long been an inadequate supply of housing, Tal has been saying.

“The solution is simply more land, more building, more flexible zoning policies, and more rapid release of land by municipalities. That’s what we need to do,” he said.

Canadian real estate has challenges that go beyond just macroeconomics and public policy. The problem of foreign buyers and vacant homes in Toronto and Vancouver has pushed the governments of Ontario and British Columbia to introduce taxes as a deterrent.

The political parties are proposing to get tough on foreign homebuyers, but the measure is “just optics,” said Better Dwelling in a commentary last December in response to the Liberals’ fall economic statement announcing that they’ll work toward a national tax-based measure “targeting the unproductive use of domestic housing that is owned by non-resident, non-Canadians.”

“The tax is just one tool, and has little impact when paired with policies designed to inflate home prices,” the housing news outlet said.

The Liberals had announced a national housing strategy in 2017, providing $70 billion over 10 years to improve the affordability and availability of quality housing. They released their campaign platform on Aug. 24, promising to “build, preserve, or repair 1.4 million homes in four years” to increase supply.

On Aug. 25, the Liberals said they’d raise taxes on Canada’s largest and most profitable banks and insurance companies to fund a program to help more Canadians afford homes.

Like the Conservatives, the Liberals also plan to ban new foreign ownership for two years. The NDP would establish a 20 percent foreign buyer’s tax.

However, Tal said that “the story of the Canadian housing market is not about foreign investors. It’s an easy out … a step in the right direction, but it’s not a game-changer.”

The Conservatives plan on building a million homes over the next three years, among other measures, to make housing more affordable, including encouraging a new market in 7-year and 10-year mortgages. They also plan to release at least 15 percent, or 5,550, of the over 37,000 federal buildings to be used as homes.

The NDP says it would create at least 500,000 affordable homes in the next 10 years. In addition, to reduce monthly payments for first-time homebuyers, it will re-introduce the 30-year term for mortgages insured by the Canada Mortgage and Housing Corp. on entry-level homes purchased.

The Greens have launched a petition to push Parliament to declare a national affordable housing and homelessness emergency. Their suggestions revolve around protecting renters, establishing a moratorium on evictions during the pandemic, implementing residential arrears assistance, and getting the government to invest more in social and co-operative housing and for Indigenous people.

The People’s Party of Canada (PPC) confirmed to The Epoch Times that it would reduce immigration to dampen demand in hot markets, lower the Bank of Canada’s inflation target from 2 percent to 0 percent to cool house price inflation, and stop funding social housing federally as it said housing is a provincial or local responsibility.

Thus, the PPC wants the feds to vacate the housing sector, saying “Ottawa’s involvement over the years has only resulted in distorting the housing markets.”

Cox is of a similar view, saying that “housing policy is not a federal issue.”