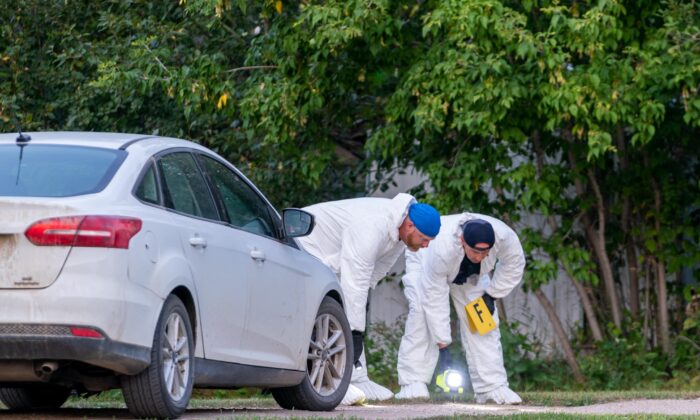 Political leaders across Canada have expressed their condolences to the family and friends of victims stabbed in the “horrific” attacks in Saskatchewan that left 10 dead and 18 others injured.

Saskatchewan Premier Scott Moe took to Twitter on Sept. 5, saying his government will arrest and bring to justice the ones responsible for the stabbing rampage on a First Nation and in a nearby village on Sept. 4.

“There are no words to adequately describe the pain and loss suffered by the victims’ families—this loss caused by these evil, vicious senseless attacks,” Moe said in a video statement.

“Yesterday’s attacks were horrific beyond anything that any of us could ever imagine—13 crime scenes, 10 lives tragically ended and many others wounded.”

The premier offered his “deepest condolences on behalf of the government and people of Saskatchewan to all of the family and friends of the victims” the day before.

The stabbings, which took place at 13 locations on the James Smith Cree Nation and nearby Weldon, northeast of Saskatoon, were first reported to Saskatchewan RCMP before 6 a.m. on Sept. 4.

Damien Sanderson, 31, and Myles Sanderson, 30, were both suspected to have committed the attacks.

In the latest update on Sept. 5, Saskatchewan RCMP said the body of Damien Sanderson was found in the morning in a grassy area on the James Smith Cree Nation.

Myles Sanderson is still at large. The RCMP said the two are brothers, and that the younger brother may have sustained injuries, though the force cannot confirm it at this point.

1/2 Update for Dangerous Person Alert issued by Melfort RCMP: Damien Sanderson has been located deceased. #RCMPSK continues to search for Myles Sanderson, who is 6 foot one inch and 240 pounds with black hair and brown eyes. He may be injured and seek medical attention. pic.twitter.com/LeS7mWGaL9

“I spoke with @PremierScottMoe and James Smith Cree Nation leadership to express my condolences following yesterday’s attacks. I let them know our government is ready to assist in any way we can, and that we’re here to support the people of Saskatchewan during this difficult time,” he said on Twitter on Sept. 5.

In an earlier tweet, Trudeau announced that the flag on the Peace Tower in Ottawa will be flown at half-mast in memory of the victims who lost their lives and those affected by the attacks.

“All Canadians are there for you,” he said.

Myles Sanderson is described as six-foot-one and 200 pounds with black hair and brown eyes. He may be in a black Nissan Rogue with SK license plate 119 MPI. It’s unknown if he’s travelling with anyone.

Following the attacks on Sept. 4, leaders of James Smith Cree Nation declared a state of emergency the same day.

Investigators have said some of the victims were targeted while others were attacked randomly. There’s been no official word on the identities of the victims so far, but Weldon residents have identified one of the deceased as 77-year-old Wes Petterson.

The Federation of Sovereign Indigenous Nations (FSIN), which represents 74 First Nations in Saskatchewan, said the “senseless acts of violence” could be related to drugs.

“This is the destruction we face when harmful illegal drugs invade our communities,” said Bobby Cameron, chief of FSIN, in a Sept. 4 press release. “Our hearts break for all those impacted.”

“I’ve reached out to the leadership [of the] James Smith Cree Nation to offer Canada’s full support and any assistance that will be needed in the coming days,” he responded on Twitter on Sept. 4.

Interim Conservative Leader Candice Bergen thanked the RCMP and other police services for their search effort, while grieving with the families and victims of the “heinous attack.”

“Thank you to the first responders for protecting the public. Let’s hope and pray the suspects are apprehended quickly,” she posted on Twitter after news of the stabbing rampage broke.

NDP Leader Jagmeet Singh said the violence and deaths in Saskatchewan “horrify us all.”

“In the days ahead, millions of Canadians mourn with you as we all struggle to understand such destruction,” Singh commented on Twitter on Sept. 5.