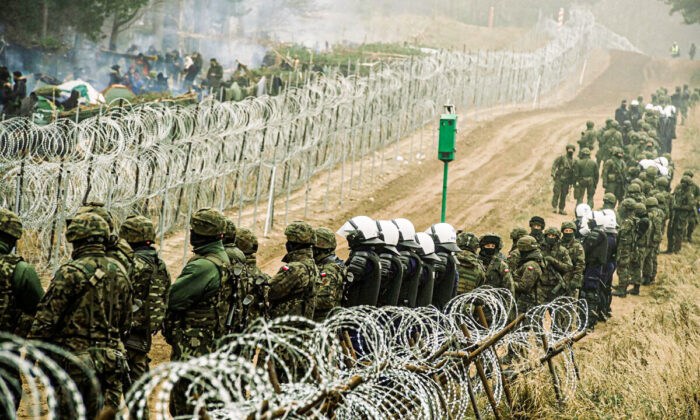 Polish soldiers and police watch migrants at the Poland-Belarus border near Kuznica, Poland, in this photograph released by the Territorial Defence Forces on Nov. 12, 2021. (Irek Dorozanski/DWOT/Handout via Reuters)
Europe

WARSAW—A group of about 50 migrants broke through defenses on the border with Belarus and entered Poland near the village of Starzyna, police said on Sunday, as the situation on the frontier becomes increasingly tense.

Thousands of migrants have traveled to Belarus in the hope of crossing into the European Union (EU), only to find themselves trapped on the border in freezing conditions.

The EU accuses Minsk of orchestrating the crisis to put pressure on the bloc over sanctions it has imposed, but Belarus has repeatedly denied this. Some countries in the region have warned the stand-off could escalate into a military conflict.

“Yesterday, before 5 p.m., around 50 people broke into Poland near Starzyna,” Podlaska police said on Twitter.

All of the people were caught by Polish uniformed services and brought back to the border, Border Guard spokeswoman Katarzyna Zdanowicz told Polish state news agency PAP.

In total, the Polish Border Guard said there were 223 attempts to illegally cross the border on Saturday. It said it expected another “big attempt” at crossing the border.

The police also said the helmet of an officer serving at the border was damaged after a stone was thrown at him.

The spokesman for Poland’s security services Stanislaw Zaryn wrote on Twitter on Sunday about reports of trucks carrying stones and rubble from Belarusian construction companies to areas near the border.

By Alan Charlish and Anna Wlodarczak-Semczuk