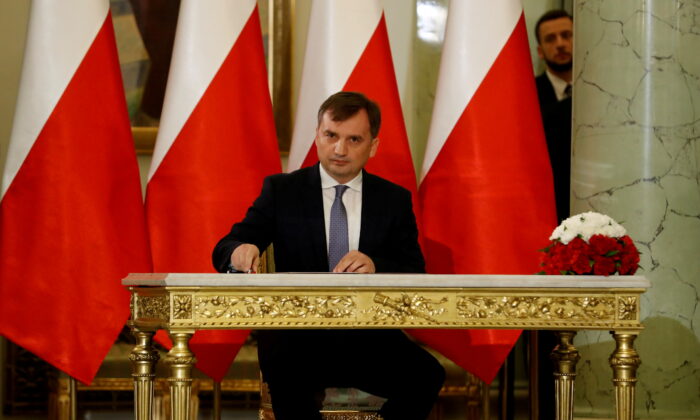 Zbigniew Ziobro signs documents after being designated as Minister of Justice, at the Presidential Palace in Warsaw, Poland, on Nov. 15, 2019. (Kacper Pempel/Reuters)
Europe

WARSAW—Poland’s justice minister said on Wednesday it was not possible to comply with a ruling by the top European Union court that the country’s new system for disciplining judges broke EU law and should be suspended.

The minister, Zbigniew Ziobro, said the EU court’s ruling that Poland should suspend its Supreme Court disciplinary chamber was “illegal in the light of Polish and European law.”

Poland is embroiled in a long-running row with the EU over judicial reforms which critics say undermine the independence of the judiciary. The ruling nationalist Law and Justice (PiS) party says the changes are needed to make courts work more effectively and remove a residue of communist influence.

On Tuesday the European Commission gave Poland until Aug 16th to observe the ruling announced earlier in July or face fines for non-compliance.

In remarks to a conference, Ziobro indicated the ruling was against Poland’s constitution.

“In Poland, there is a constitution and the principle of legalism. Based on these principles, there is no possibility of implementation of the rulings by the court in Luxembourg,” Ziobro said.

Ziobro is the architect of a sweeping overhaul of the judiciary that set up the disciplinary chamber, a move already condemned by the Court of Justice of the EU (ECJ) in Luxembourg and the bloc’s Brussels-based executive, which acts as the guardian of laws across the 27 member states.

The row may lead to the ECJ imposing hefty fines on Warsaw or the other EU countries suspending financing. Poland is due to get some 770 billion zlotys ($200 bln) from the bloc by 2028.

PiS has challenged the primacy of European laws over national ones, a key tenet of European integration. That drew warnings that the party is edging away from the EU.