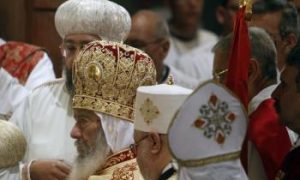 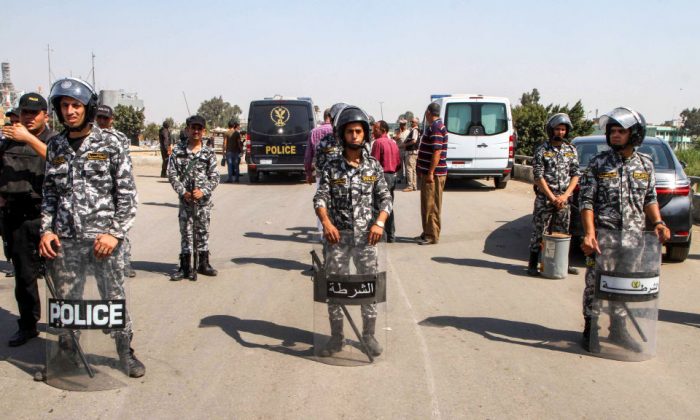 Members of the Egyptian security forces form a perimeter for investigators gathered around the body of a suicide bomber, whose explosives detonated before reaching the Coptic Orthodox Church of the Virgin Mary, in the eastern Mostorod neighbourhood of the district of Shubra al-Kheima on the northern outskirts of the capital Cairo, on August 11, 2018. - Egypt's state media reported that the alleged bomber, who was reportedly hiding the explosives under a fluorescent vest, was forced to detonate a suicide belt 200 metres away from the church as a result of the heavy police presence around it. Christian sites of worship across Egypt have been repeatedly targeted in attacks claimed by the Islamic State group. (Photo by STRINGER / AFP) (Photo credit should read STRINGER/AFP/Getty Images)
Middle East

Policeman Killed in Egypt Defusing a Bomb Near a Church

CAIRO—An Egyptian police officer was killed on Jan. 5 while attempting to defuse a bomb found near a Coptic Christian church in an eastern Cairo suburb, state television reported.

Security sources said two policemen and an onlooker were also injured when the device exploded. Egyptian state media and multiple security sources reported that the explosive device was one of two found inside a bag on a nearby rooftop.

In a season that has been very hard for followers of Jesus Christ in the Middle East, I’m deeply encouraged by the opportunity to experience “John 17 unity” — Biblical, Christ-centered unity — with my Coptic Orthodox and Protestant brothers in Egypt. #PrayForEgypt pic.twitter.com/mDmw7vrdtE

No group has claimed responsibility for setting the bombs.

Security forces have stepped up their presence outside churches and other places of worship ahead of New Year’s Eve and Coptic Christmas, which is celebrated on Jan. 7.

Copts are the largest Christian population in the Middle East and North Africa, making up about 10% of the population in Egypt. They have long complained of discrimination.

Authorities have placed armed guards outside churches and monasteries in an attempt to protect them from jihadist attacks.

In November, extremists killed seven people returning from baptizing a child at a Coptic monastery about 160 miles up the River Nile from Cairo.