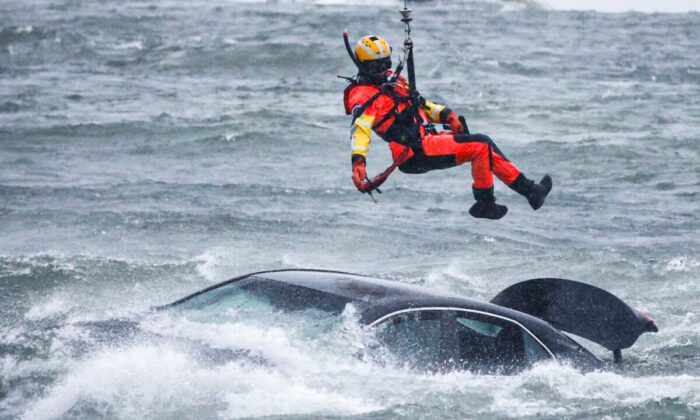 A U.S. Coast Guard diver is lowered from a hovering helicopter to pull a body from a submerged vehicle stuck in rushing rapids just yards from the brink of Niagara Falls, in Niagara Falls, N.Y., on Dec. 8, 2021. (Jeffrey T. Barnes/AP Photo)
NY News

Police: Woman Drove Into River at Niagara Falls on Purpose

NIAGARA FALLS, N.Y.—A woman who died when her car went into the icy rapids above Niagara Falls likely drove into the river on purpose, authorities said Thursday.

The New York State Park Police said “entry into the water appears to be an intentional act,” and an investigation was ongoing.

The driver, a woman in her late 60s who lived in the area, was pulled from the river Wednesday by a U.S. Coast Guard swimmer who descended by cable from a hovering helicopter, landed on top of the mostly submerged vehicle in the churning waters, then climbed in through its window.

At the time, the sedan was stuck on rocks but was perilously close to going over the brink of the American Falls, one of three waterfalls that make up Niagara Falls.

As of Thursday, the car remained mostly submerged in fast-moving water about 50 yards (45 meters) upstream from the edge of the waterfall. Officials were trying to determine how it could be taken out.

Authorities have not officially identified the woman, who died before rescuers could get to the vehicle. Her cause of death is still being determined.

It was unclear how exactly the car got into the Niagara River. Witnesses reported seeing it floating near a pedestrian bridge.