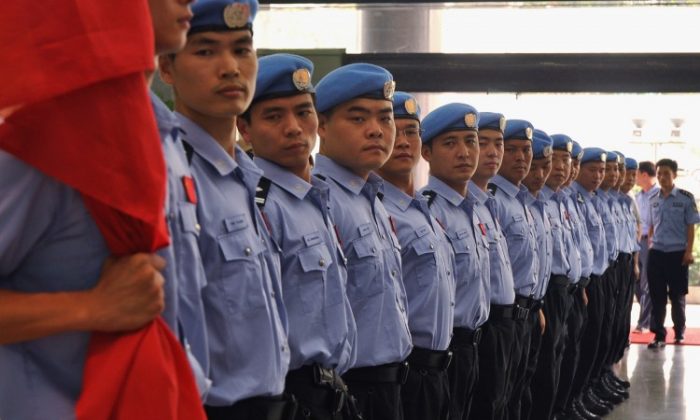 A recently organized mass training for police chiefs around the country appears to be part of an overall effort to take important security functions from the control of a Communist Party security committee that has been under the control of rivals to the current leadership.

From June 26 to July 31, the Ministry of Public Security (MPS) will conduct intensive ideological education and training, to take place in three phases, for the 1,400 county and city-level police chiefs who were appointed since 2010. This is the latest round of nationwide training for new police chiefs since 2009 and 2010. The theme for this year’s training is: Improve the ability of the frontline law enforcement officers and safeguard local stability and development.

Meanwhile, on June 18, the Central Party School’s official publication, The Study Times published an article titled, “Who is managing the social order?” The school, which trains new party cadres, is currently headed by Xi Jinping, current vice president, and successor to the head of the Communist Party.

The article stated that the Political and Legislative Affairs Committee (PLAC), an extralegal Party entity that oversees all law enforcement authorities in the country, has already exceeded the limits of its authority and has caused obstacles to domestic governance.

In light of these events, many interpret the training in Beijing to be another step in the leadership’s attempt to replace the PLAC and help the MPS to regain power.

The PLAC is headed by security chief Zhou Yongkang, who reportedly conspired with former Chongqing party chief Bo Xilai to stage a coup against Xi Jinping. Previously, The Financial Times reported that Zhou’s power has been transferred to Minister of Public Security Meng Jianzhu, despite that Zhou remains a member of the Politburo Standing Committee and head of the PLAC.

According to Peter Mattis, editor of the Jamestown Foundation’s China Brief, writing in The Diplomat, Zhou’s successor will likely see his power downgraded at the 18th National Congress.

Other figures in China have also speculated that the PLAC will not hold onto the vast power it has acquired. Wang Yukai, a professor at the China National School of Administration, which is a training ground for communist officials, told the state-run Hong Kong China News Agency that recent events have challenged the regime’s “maintaining stability” policy, such as the massive protests in Wukan, Guangdong Province, the Bo Xilai scandal, and the Chen Guangcheng incident. These events have prompted the regime to re-evaluate its approach to “maintaining stability.” Wang said that he “does not rule out [the possibility that] past organizational forms will undergo adjustments” at the 18th National Congress.

Xiang Xianjun, chief correspondent at Southern Daily, the official newspaper of the Guangdong Province Communist Party, recently wrote on his Sina Weibo microblogging account that the recent string of mass protests in China indicates that the “maintaining stability” policies will only lead to a “dead end.” He noted that the biggest challenge for the new leadership will be how to revise the legal system so that the government and the people will abide by the law of their own accord.