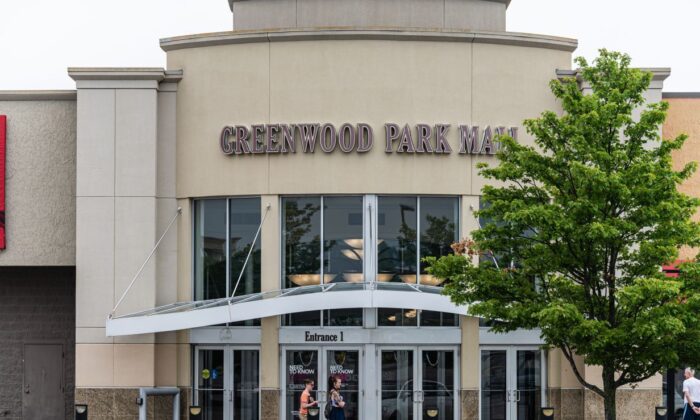 A group of people wait outside of an entrance to Greenwood Park Mall in Greenwood, Ind., on July 18, 2022. (Jon Cherry/Getty Images)
Crime and Incidents

Authorities said the 20-year-old shooter who opened fire in an Indiana mall on July 17 waited inside a bathroom for an hour before fatally shooting three people and injuring two others before an armed bystander shot and killed him.

Greenwood Police Department Chief Jim Ison said during a July 18 press conference that the shooter was in the Greenwood Park Mall bathroom for one hour and two minutes before he entered the food court area and fired shots.

He said investigators believe that Jonathan Douglas Sapirman, 20, spent that time preparing and possibly assembling a disassembled rifle that he had brought in his backpack. He ended up firing 24 rounds within two minutes.

The deceased victims were identified as Pedro Pineda, 56; his wife, Rosa Mirian Rivera de Pineda, 37; and Victor Gomez, 30, by the Johnson County Coroner’s Office, according to Ison.

Sapirman was identified as the shooter by Ison and the Johnson County Coroner’s Office. He identified the good Samaritan as Elisjsha Dicken, 22, who was said to be shopping with his girlfriend and “lawfully carrying” a handgun in the mall.

“Many more people would’ve died last night if not for a responsible armed citizen that took action very quickly, within the first two minutes of this shooting,” Ison said.

Dicken’s “actions were nothing short of heroic,” according to Ison, who noted that Dicken was armed with a 9-millimeter pistol.

“He engaged the gunman from quite a distance with a handgun, was very proficient in that, very tactically sound,” Ison said. “And as he moved to close in on the suspect, he was also motioning for people to exit behind him.”

In a July 18 press conference, officials said Sapirman had no criminal history but had a record as a juvenile. The shooter purchased the rifle he used on March 8 and purchased another rifle, which was found in the bathroom, on March 9, authorities said, noting that he was also armed with a handgun.

Although police don’t know a motive for the attack, Sapirman’s relatives told investigators that he recently received notice that he was being evicted from his apartment, although Ison said authorities were still trying to confirm if that was the case. Relatives also said Sapirman resigned from a warehouse job in May, he said.

Gun rights groups said on July 18 that the good Samaritan’s actions are an example of why it’s important to allow Americans to carry firearms in public. The Supreme Court recently struck down a New York law that placed limits on who can carry guns outside the home.

“We will say it again: The only way to stop a bad guy with a gun is a good guy with a gun,” the National Rifle Association (NRA) wrote in a Twitter post.