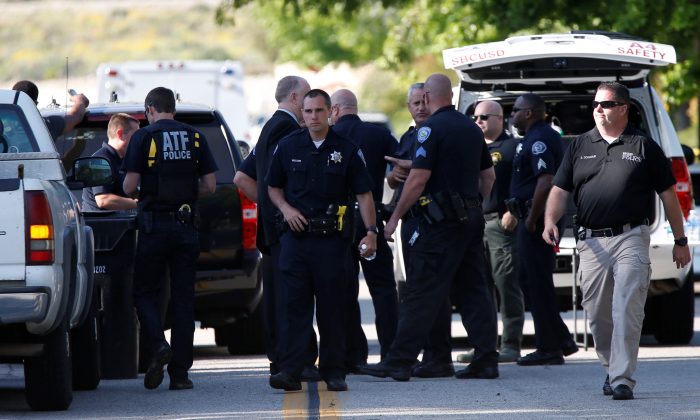 Police officers are pictured after a shooting at North Park Elementary School in San Bernardino, Calif., on April 10, 2017. (REUTERS/Mario Anzuoni)
Crime and Incidents

LOS ANGELES—Police in San Bernardino, California, sought more clues on Tuesday to the marital discord they believe led a gunman to walk into an elementary school class taught by his estranged wife and open fire, fatally shooting her and a student before killing himself.

Monday’s shooting at North Park Elementary, the latest of dozens of U.S. schools traumatized by armed intruders in recent years, left a second child badly wounded and reopened a debate about what educators can do to safeguard students against gun violence.

It was especially wrenching for the city of San Bernardino, the “Inland Empire” town about 65 miles east of Los Angeles where another shooting rampage 15 months ago left 14 people dead and more than 20 wounded at an office holiday party.

Unlike the 2015 massacre, carried out by a radicalized Muslim couple in what authorities described as an act of terrorism, police said the latest shooting apparently grew out of a domestic dispute between the suspect and his wife.

The gunman in the North Park shooting was identified as Cedric Anderson, 53, of nearby Riverside, who according to police had a criminal history that included weapons charges and domestic violence that predated his brief marriage to the slain teacher, Karen Elaine Smith, also 53.

Her mother, Irma Sykes, told the Los Angeles Times the couple had been friends for four years before they married in January and that her daughter “decided she needed to leave him” after just a month.

“She thought she had a wonderful husband, but she found out he was not wonderful at all,” Sykes was quoted as saying. “He had other motives. She left him, and that’s where the trouble began.” She declined to elaborate, the newspaper said.

Anderson was reported in local media to have served in the military for eight years, though police said they are still seeking to confirm that.

The two students hit by gunfire happened to have been standing behind Smith and were believed to have been unintentional victims, Police Chief Jarrod Burguan told reporters on Monday. One 8-year-old boy, Jonathan Martinez, died from his wounds. A 9-year-old classmate who was not publicly identified was admitted to a hospital, where he was said to be in stable condition.

Fifteen students and two adult teacher assistants were in the classroom at the time of the shooting, police said.

Police said Anderson was welcomed into the school as a legitimate visitor who stopped by to “drop something off with his wife,” Burguan said. He kept his weapon concealed until opening fire in the classroom without saying a word, then reloaded and shot himself to death.

Police and school officials said Anderson checked in at the school’s front office and even showed his identification. It was not clear whether a police officer normally assigned to the school was present.