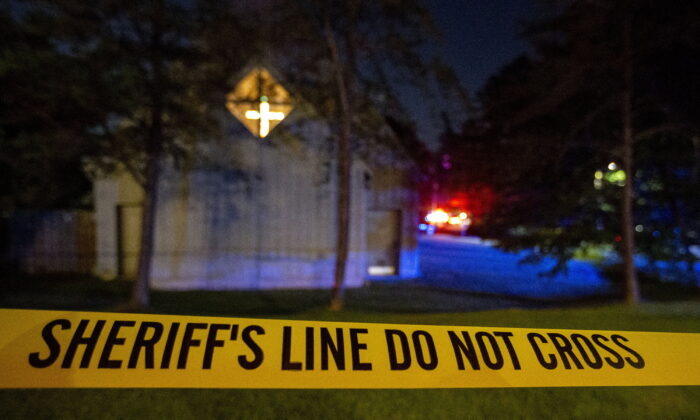 Police barricade off the area after a shooting at the Saint Stevens Episcopal Church in Vestavia, Ala., on June 16, 2022. (Butch Dill/AP Photo)
Crime and Incidents

Police of Vestavia Hills, Alabama, commended a “hero” church member who subdued an active shooter who killed three people at a church.

The suspect, Robert Findlay Smith, is a 71-year-old man and “occasional attendee” of the St. Stephen’s Episcopal Church, according to Vestavia Hills Police Department. The incident happened during a dinner at the church on Thursday night when the suspect at some point pulled out a handgun, striking three victims.

“Another attendee at the event subdued the suspect, and held him down until law enforcement arrived,” VHPD Capt. Shane Ware said during a press conference on Friday morning.

“It was extremely critical in saving lives,” Ware said. “In my opinion, he’s a hero.”

The police didn’t reveal the name of the hero, but one local news report identified him as Jim Musgrove, a church member who “hit the shooter with a chair and wrestled the gun away” from the suspect.

The police identified the victims as 84-year-old Walter Rainey, 75-year-old Sarah Yeager, and 84-year-old Jane Pounds. The former one was killed at the scene, and the latter two died after being sent to the hospital.

At the press conference, Ware was asked to explain radio communications between police officers during the active shooter situation, which appeared to indicate that police “have dealt with him before” and knew where he lived and what he drove.

Ware replied that any police interactions with the suspect in the past are currently being investigated and it’s premature at this point for him to comment on that topic.

A possible motive is still under investigation, he added.

Alabama Gov. Kay Ivey released a statement after the shooting, saying, “This should never happen.”

“As we are learning about the shocking and tragic loss of a life at St. Stephen’s Episcopal Church in Vestavia, we want to offer our prayers for the victim’s family, the injured, and the entire church community,” Ivey said. “I am glad to hear the shooter is in custody. This should never happen—in a church, in a store, in the city, or anywhere. We continue to closely monitor the situation.”

The incident comes amid a number of shootings that drew national attention and prompted debates over gun control, including the May 14 attack at a grocery store in Buffalo, New York, and the May 24 shooting that left 19 children and two adults dead at a Uvalde, Texas, elementary school.

In light of the shootings, President Joe Biden pleaded with Congress for a ban on sales of what he called “assault weapons and high-capacity magazines.”

“If we can’t ban assault weapons, then we should raise the age to purchase them from 18 to 21. Strengthen background checks. Enact safe storage laws and red flag laws. Repeal the immunity that protects gun manufacturers from liability. Address the mental health crisis deepening the trauma of gun violence and as a consequence of that violence,” Biden said in an evening address from the White House.