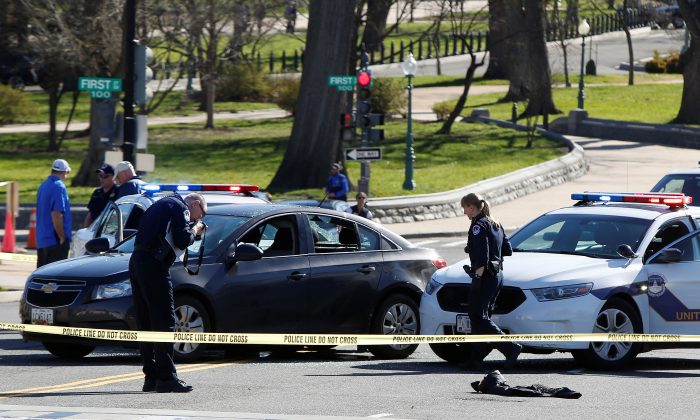 Capitol Hill police inspect a car whose driver struck a Capitol Police cruiser and then tried to run over officers, near the U.S. Capitol in Washington on March 29, 2017. (REUTERS/Joshua Roberts)
US

Police Open Fire After Driver Strikes Cruiser Near US Capitol

WASHINGTON—A woman was arrested near the U.S. Capitol in Washington after police said she drove erratically, crashed into another vehicle and tried to run over officers on Wednesday.

No one was hurt during the morning commotion, during which police fired shots, and the incident did not appear related to terrorism, Capitol Police spokeswoman Eva Malecki told reporters.

“Although preliminary, this incident appears criminal in nature with no nexus to terrorism,” Malecki said at a news conference.

The events came a week after five people were killed and about 40 injured in London, when a car plowed into pedestrians near Britain’s parliament and the suspected militant Islamist-inspired attacker stabbed a police officer.

The drama near the Capitol began after officers attempted a traffic stop for an erratic driver. The woman made a U-turn and drove away, nearly hitting officers and striking at least one other vehicle, Malecki said.

When police stopped the car after a brief pursuit, they fired shots as they tried to arrest the suspect, Malecki said. She declined to say why officers opened fire, noting the incident remains under investigation.

The woman has not been identified.

As the incident unfolded, a Reuters reporter saw two Capitol Police officers running down the western side of Capitol Hill holding assault rifles.

Operations inside the white-domed Capitol appeared normal however. Tourists filed through theCapitol Rotunda, and the U.S. Senate opened its session with Republican Majority Leader Mitch McConnell urging confirmation for Neil Gorsuch to the Supreme Court.

After the incident, television footage showed officers and police vehicles surrounding a dark-colored sedan blocked off by police tape.

In 2013, Capitol Police shot and killed the driver of a car carrying a 1-year-old girl after a chase from near the White House to the Capitol.