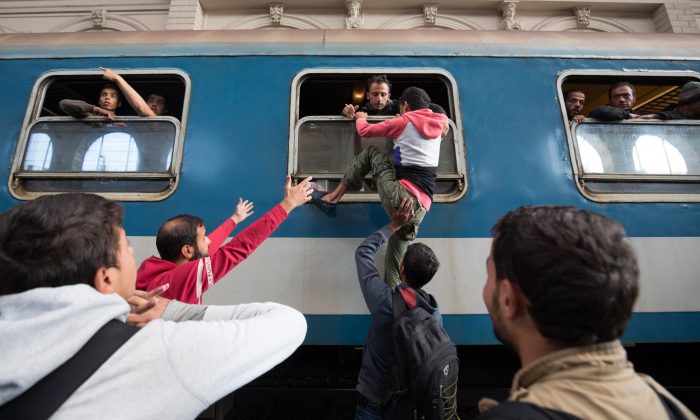 Migrants board trains in Keleti station after it was reopened this morning in central Budapest on September 3, 2015 in Budapest, Hungary. (Matt Cardy/Getty Images)
Europe

Hungary Opens Door to Trains for Migrants, but Only to Camps

BUDAPEST, Hungary—Thousands of people desperate to reach Western Europe rushed into a Budapest train station Thursday after police ended a two-day blockade, setting off a wave of anger and confusion as hundreds shoved their way onto a waiting train. But when it tried to drop them off at a Hungarian camp for asylum seekers, a bitter showdown began.

One man threw his wife and infant son onto the tracks, screaming in Arabic, “We won’t move from here!” Police surrounded the prone family, pulled the husband away and handcuffed him as he wailed. His wife and diaper-clad boy — apparently uninjured despite their stumbling descent onto the tracks — were freed and allowed to rejoin other migrants.

The scene of desperation was just one of many that unfolded Thursday as tempers flared in Hungary’s war of wills with migrants trying to evade asylum checks and reach Western Europe, a showdown with consequences for the entire continent.

As Hungary’s anti-immigrant prime minister warned European partners that he intends to make his country’s borders an impassible fortress for new arrivals, his government struggled to coax thousands of unwanted visitors away from the Budapest transportation hub that has been turned into a squalid refugee camp.

People fleeing war and poverty in the Middle East, Asia and Africa rushed into the Keleti train terminal when police unexpectedly withdrew Thursday morning, ending a blockade designed to stop migrants from boarding trains to their desired destinations in Germany and Austria.

In desperate scenes, people pushed each other to reach the train’s six carriages. Children caught in the melee cried in terror as parents or older siblings pulled them through open windows, thinking that getting on board meant they would be first to escape Hungary.

But instead of heading to the Austrian border, the overloaded train stopped at Bicske, a town northwest of Budapest that holds one of the country’s five camps for asylum seekers — facilities the migrants want to avoid because they don’t want to pursue asylum claims in economically depressed Hungary. As the train platform filled with police came into view, those inside chanted their disapproval and their determination to reach Germany, their almost unanimous goal.

The crowd, angrily waving train tickets to Vienna and Munich, refused police orders to board buses to the asylum center, pushing their way past police and back onto the train. A day-long standoff ensued in which police and charity workers took turns handing food and water to the passengers, only to have them tossed out train windows in protest.

About 100 police kept watch on the train, barring media from the platform, but didn’t remove the migrants by force.

The head of police border control, Col. Laszlo Balazs, said 16 people voluntarily checked into the asylum center, while about 500 others refused. He said officers were using loudspeakers to inform those who wouldn’t comply of “their legal obligations.”

“Nobody can avoid identity checks. Everyone must submit themselves to this measure, and the police are keeping this train in place until they do,” he said.

Back at the Budapest train station, announcements in Hungarian and English — but not Arabic, the language of most of those gathered inside — declared that all services from the station to Western Europe had been canceled. A statement in English on the main departures board said no more trains to Austria or Germany would leave “due to safety reasons until further notice!”

Conditions at Keleti station have grown increasingly unsanitary despite the efforts of volunteers distributing water, food, medicine and disinfectants. The numbers of those stuck there have swelled since Hungary reversed course Tuesday after allowing more than 2,000 migrants to travel on trains heading west the day before. Thousands were stranded after buying tickets costing 61 to 122 euros ($68 to $136).

Hungary’s rail company said Thursday it was refusing to refund the tickets at the station, citing fears that some may be counterfeit. It said ticket-holders must file refund requests in writing and have the reimbursement mailed to them.

The waiting is taking its toll and has sparked occasional protests near the terminal entrance. The migrants survive on food handouts from Hungarian charities and individual donors, augmented by their own purchases from pizza stalls, kebab shops and burger joints. Sleeping overnight on the cold concrete proves fitful, leaving many semi-comatose in a carpet of bodies by day.

Amid the human sprawl, children played and scavenged. One baby boy crawled away from his sleeping parents to eat breadcrumbs scattered on the pavement. Nearby, an unattended toddler walked to a pile of garbage and picked at discarded candy wrappers in search of a treat.

Engaging in cramped games of volleyball and soccer, children struck their parents and passers-by with errant balls, laughing as they did so. Hundreds of adults took turns washing their clothes, hair, feet and brushing their teeth at a bank of five faucets with no sewage drain that was supposed to provide sufficient drinking water for the entire 3,000-member camp. Discarded clothing lay everywhere.

The question of how to manage the crisis was hotly debated Thursday in Brussels at meetings between European Union leaders and Hungary’s prime minister, Viktor Orban. His chief of staff, Janos Lazar, said 160,000 migrants had reached Hungary this year, 90,000 of them in the past two months alone, representing around half of all asylum-seekers in Europe.

“We Hungarians are full of fear,” Orban told a Brussels news conference, warning that the acceptance of so many Muslims from Syria, Iraq, Afghanistan and elsewhere would erode Europe’s Christian bedrock.

Orban confirmed his government’s plan to send at least 3,000 troops to Hungary’s southern border with Serbia, where police patrols, razor-wire coils and a 13-foot (4-meter) fence are already in place to deter new arrivals from the non-EU member.

The premier said he expected lawmakers to debate and pass a raft of government measures Friday that he hopes will strengthen border security with Serbia starting Sept. 15. The package of legislative bills would authorize the troop deployment, create new criminal penalties for those who damage the border fence, stiffen prison sentences for smugglers and create new border asylum-processing centers with an emphasis on quick verdicts, limited appeals and a possible new deportation regime to Serbia.

Orban said Hungary’s dilemma was really “a German problem. Nobody would like to stay in Hungary. All of them would like to go to Germany.”

But Serbia’s prime minister, Aleksandar Vucic, warned that if Hungary drew a new line in the sand, this would simply create a new problem for Serbia, where virtually none of the migrants passing through want to claim asylum.

Vucic said the EU needed a region-wide plan to ensure migrants received care and support if Hungary sealed its border. “Otherwise … in 12 days we can face huge problems here.”