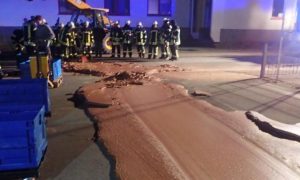 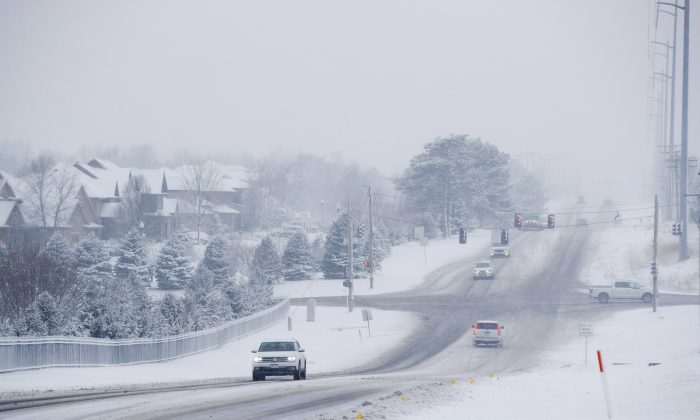 Cars during a snow storm in a file photo. (Ryan Soderlin/Omaha World-Herald via AP)
US News

Police officers in Pennsylvania were called on an 11-year-old boy trying to make some money by selling cups of hot chocolate during the cold weather.

Andrew Donaldson, the boy, said that he often makes over $50 in one day when he sets up his stand and sells drinks, usually lemonade during the summer.

With the cold weather on Feb. 1, he wanted to take advantage and try selling hot chocolate.

“I was kind of bored, so I was like, I can just come out and do something, so I came out and sold hot cocoa,” Andrew told WISN.

He took out an electric water boiler and a can of Swiss Miss and mixed cups on the spot.

Then, two police officers approached him.

“They asked if I was by myself, and I said, ‘No, the babysitter is in the house,'” Andrew said. The officers each bought a cup of hot chocolate.

They told the boy’s parents that a concerned neighbor called, worried about the boy being outside in the cold weather.

Rebecca Lukens, Andrew’s mom, said that the officers were friendly.

“Whoever called the cops on him are the real MVPs because we learned that the local police were really friendly,” Lukens said.

Two Canadian boys also set up a stand recently to raise money for a local charity.

Teddy Doucette, 9, and Owen Gartshore, 10, set up a stand on Jan. 12 called The Good Cup outside a house to raise money for the Inn of the Good Shepherd.

“I came up with (the idea) and I showed Owen, because there’s a ton of people out there who need some help,” Teddy told Sarnia This Week.

“We have everything,” Owen added. “We have coats, we have food and we have water but some people don’t have any of that. If they’re lucky they get to sleep in a car. any of that.”

According to the Inn’s website, the charity provides services to those in need of food, shelter, and other essentials. The group runs a food bank, a soup kitchen, and an emergency shelter and helps families out with rent and utilities among other efforts.

“Through the generous support from community organizations, individuals, business and industries; The Inn of The Good Shepherd is able to make a difference in the lives of thousands of individuals and families. In addition, we help improve the quality of life in our community by reaching out to friends and neighbors,” the group stated.

A 911 dispatcher is being praised for staying on the phone after a boy called to say he “had a really bad day” and had “tons” of homework.

The boy, who hasn’t been named publicly, told Antonia Bundy, the Lafayette Police Department dispatcher, that he was struggling with math homework.

The department released audio of Bundy calmly helping the student out with his homework.

With her help, the boy was able to solve the problem.

“I’m sorry for calling you, but I really needed help,” he said.

Our dispatchers never know what the next call might be.They train for many emergency situations, homework help is not one they plan for. We don’t recommend 911 for homework help but this dispatcher helped a young boy out and brightened his day.@PoliceOne @apbweb @wlfi @WTHRcom pic.twitter.com/w3qCYfJP7O

“Our dispatchers never know what the next call might be. They train for many emergency situations, homework help is not one they plan for. We don’t recommend 911 for homework help but this dispatcher helped a young boy out and brightened his day,” the Lafayette Police Department said in a post on Twitter.

“When a young child calls to ask for homework help, Antonia didn’t miss a beat,” it added later.

“We get a lot of unusual call requests but this one kind of stood out,” Lafayette Police Sgt. Matt Gard added to ABC 7.

Officials said that Bundy, who has been a dispatcher since April 2016, is a hard worker.

“She’s very much a dedicated employee, it doesn’t surprise us that she goes above and beyond on a regular basis,” said Gard.