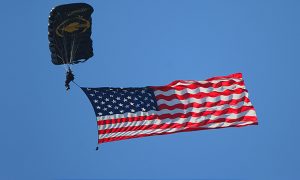 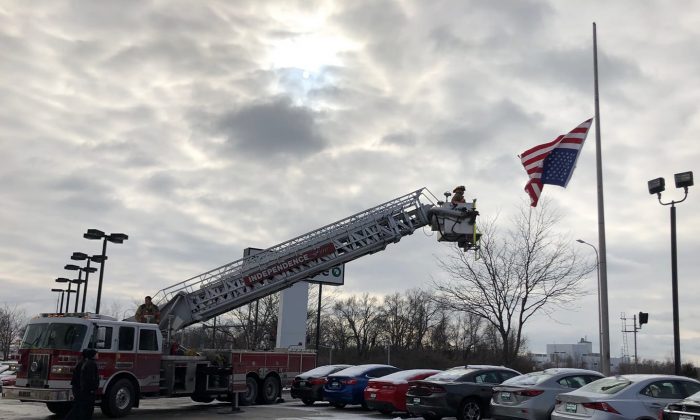 A Missouri police officer is being praised for fixing an American flag he saw hanging upside down.

Independence Police Officer David Wehlermann was responding to a call on Jan. 19 when he spotted the large flag that was upside down outside of a local business.

He contacted the owners of the business but they said they couldn’t get it fixed until Monday, prompting him to take action.

“They said they get a lot of angry calls from passersby about the flag upside down, so I called dispatch and requested that a ladder truck come out, and the great crew of Ladder 2 came out and fixed the flag,” Wehlermann told Fox News.

Photographs showed the fire crews using a hoist to reach the flag, which was well above the ground.

Wehlermann, also an Air Force veteran, added about the flag: “It means the world to me. I love this country, I fought for it. It’s the greatest nation on Earth. It’s a symbol of freedom for the world, and I want it to be rightly displayed.”

“Thank you Officer Wehlermann and our partners at the Independence Fire Department,” the department said.

The photo has gone viral, with hundreds of shares and thousands of reactions along with a number of comments.

So Officer Wehlermann was on patrol today and saw this flag hanging upside down at a local business on Noland Road. The…

“As a veteran, he is already a hero in my book … he just earned his Cape. Soar high Officer Soar high!!!” said Michael Summers.

“Strong work. I always go out of my way to protect our Flag. USAF VET and my oath doesn’t expire,” added John Hillfirty Jr.

“That is truly awesome! Thank you so much for sharing. So many people disrespect the flag this these days it is so good to see that there are still people that care and act with respect to the flag!” said Jim Hartley.

“Not only thank you to the officer and the fire department for assisting but thank you to all the comments on here for people being proud of what he’s done instead of the usual whininess we get on Facebook about wasting taxpayer money,” added John Farris.

Many people enjoy flying the American flag or seeing it flown but some don’t know some interesting facts about the flag.

The flag started with 13 stars in 1777 and gradually expanded over the years before arriving at the current 50 stars on July 4, 1960, according to the Smithsonian Institution.

Flags could look somewhat different for many years until an executive order in June 1912 mandated the order of the stars and proportions of the flag.

“Consequently, flags dating before this period sometimes show unusual arrangements of the stars and odd proportions, these features being left to the discretion of the flag maker. In general, however, straight rows of stars and proportions similar to those later adopted officially were used,” the Smithsonian stated.

A series of executive orders and resolutions, including that one, gradually shaped the flag’s design. The last two were from President Dwight Eisenhower in 1959. The final one provided for the arrangement of the stars in nine rows staggered horizontally and eleven rows of stars staggered vertically.