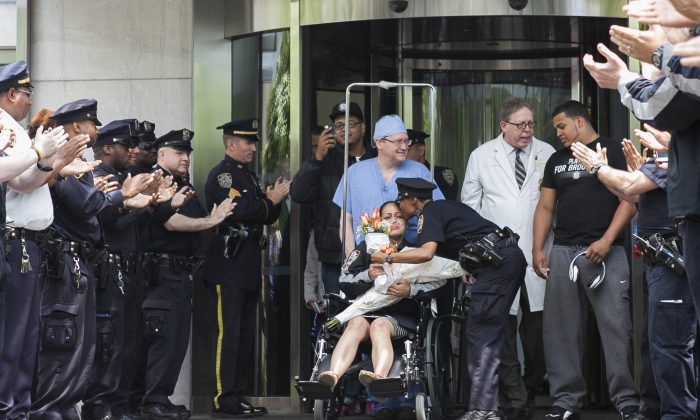 NEW YORK—The police officer who was injured in a high-rise fire that killed her partner was discharged from the hospital Monday.

Rosa Rodriguez, 36, a mother of four, was rushed to the hospital after responding to a fire on Coney Island on April 6. She inhaled an excessive amount of smoke, critically damaging her lungs. Her partner, Dennis Guerra, died from the same injuries.

Mayor Bill de Blasio, Police Commissioner William Bratton, and staff doctors escorted Rodriguez in a wheelchair from the hospital on the Upper East Side to a black police cruiser. Clapping could be heard from inside the hospital before the group emerged at the entrance.

Outside, nearly 100 uniformed police officers stood at attention. They cheered and clapped as Rodriguez was rolled to her car as ceremonial bagpipes filled the air.

Rodriguez had a 40–50 percent chance of dying, according to her doctor, Palmer Bessey. She may never fully recover from her injuries.

Rodriguez was enthusiastic throughout the recovery process, trying to do a little more every day, according to her doctor. When she began to recover two weeks ago and could only speak in a whisper, she told her commanding officer, Deputy Inspector Carlos Valdez, that she wants to go back to work.

“I told her to take it easy,” Valdez said.

Guerra, Rodriguez’s partner, never recovered from his injuries. He died three days after the fire. Guerra was the first police officer to die in the line of duty since 2011.

Police said that Marcell Dockery, a 16-year-old, has admitted to lighting a mattress on fire because he was bored. Dockery faces several charges, including felony murder and arson.

“In light especially of what happened to Dennis when Rosa got injured,” Valdez said, “its a huge, huge moral boost for her to walk out and be able to communicate well. We were very, very concerned about her in the immediate days after the incident occurred.”

Rodriguez is now on a long path to recovery, which may take as long as a year. Bessey, her doctor, said that walking is the best exercise she can do.

“It’s like that Asian saying: the journey of a thousand miles begins with one step,” Bessey said.