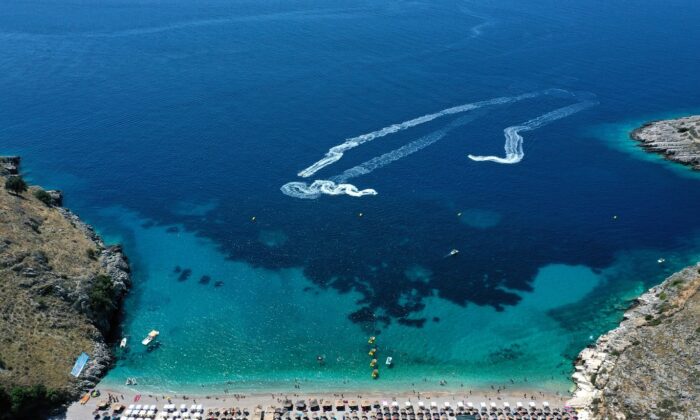 People take part in water sports next to the beach of Llaman, near the city of Himare in southern Albania, on Aug. 6, 2019. (Gent Shkullaku/AFP via Getty Images)
Europe

An off-duty police officer has been arrested on suspicion of “negligent homicide” after a 9-year-old British girl was killed by a speedboat on a beach in Albania.

Jonada Avdia, who lived in Barking, east London, was on holiday in her parents’ home country and was swimming in the sea 15 feet from Potami Beach in the town of Himare, not far from the Greek border, on Tuesday when she was struck and fatally injured by the speedboat.

The tragedy unfolded in front of hundreds of people on the crowded beach and photographs were posted on social media of the child’s distraught father, Bledar, apparently grappling with the boat’s driver.

An Albanian police watchdog, the Police Oversight Agency (AMP), said the entire chain of command of the Local Directorate for Border and Migration—which is responsible for preventing boating accidents—had been fired following the incident.

The Albanian news agency, Top Channel, said the man in charge of the speedboat was Arjan Tase, an off-duty police officer from the city of Elbasan, who was on holiday in Himare.

The AMP said Tase had been arrested for “negligent homicide” after the incident, which happened around 2 p.m. on Tuesday.

On its Facebook page, AMP said Tase was driving the boat from Porto Palermo to Potami, with other members of his family on board, when the incident took place.

AMP said, in a statement translated from Albanian: “At Potami Beach, contrary to water traffic rules, [he] inserted the float vehicle into the waterspace designated for vacationers. This aquatic area has been surrounded by plastic bowls [sic], according to the provisions in the legal acts that normulate [sic] this activity.”

It went on to say that, after dropping his relatives off at Potami Beach, Tase “performed careless manouevres” as he headed back towards the open sea.

The boat then struck the little girl in the back, killing her instantly.

Police chief Gledis Nano has dismissed 15 officers in the Local Directorate for Border and Migration in the nearby city of Vlora and set up a special group including specialists in migration, public security, and professional standards to work to prevent future incidents with vessels.

Himare, a popular beach resort south of Vlora, is home to an ethnic Greek community and was the home town of Pliny the Elder in ancient Greece.

The Avdia family is believed to have moved to England for work and Jonada was born in London, which has a thriving Albanian and Kosovan community.