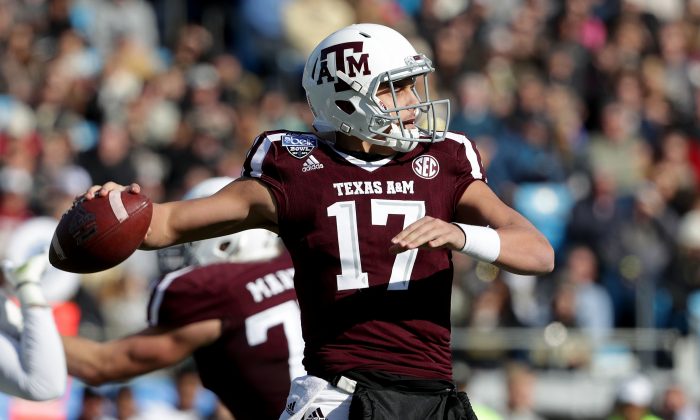 Nick Starkel #17 of the Texas A&M Aggies drops back to pass against the Wake Forest Demon Deacons during the Belk Bowl at Bank of America Stadium on December 29, 2017 in Charlotte, North Carolina. (Streeter Lecka/Getty Images)
Crime and Incidents

A reporter for a Texas college football team who mysteriously went missing on the weekend was found on Monday, Jan. 8, Houston police said.

Officers found Courtney Roland, 29, near the Houston Galleria mall. They said that she appeared “unharmed” in an updated Tweet and said that she would be taken to a hospital for evaluation.

UPDATE: Our officers have found Ms. Roland in the Galleria area. She appears unharmed. She'll be taken to an area hospital for an evaluation. We are not providing the location where she was found or hospital at this time. More info to follow. #HouNews https://t.co/btdaJLbifW

Her father, Steve Roland, said that police called him on Monday from a Chick-fil-A but he was not sure if that’s where police found her. As of writing authorities had not specified the exact location where she was discovered.

“We don’t have too many details right now; we’re just happy she’s OK,” he told the Houston Chronicle.

Further details surrounding the cause of her disappearance were not immediately disclosed.

Roland covers Texas A&M football for AggieYell.com and Rivals.com, her Twitter account states. She was first reported missing late Saturday night on Jan. 6. after telling a friend that she was being followed by someone, the Houston Chronicle reported.

According to Fox News, Roland was spotted walking alone in a store at the Galleria on Sunday, Jan. 7.

Courtney’s roommate said a suspicious man followed her home in a blue truck. She told Click 2 Houston that the blue truck looped back around and parked behind her before Roland got out of the car. The truck then sped off.

The roommate said she and Courtney were meant to meet up on Sunday but she never heard back from her again.

Courtney’s mother said she received a strange text from her phone that said “hello the owner of this phone Courtney. I am buying an iPad,” according to Click 2 Houston.

The roommate also said that Courtney’s vehicle had been broken into just six weeks ago. Adding that she had been on high alert since the incident.

Before she was found, many people took to Twitter to use the hashtag #HelpFindCourtney in an effort to locate her. Gov. Greg Abbott was among them.