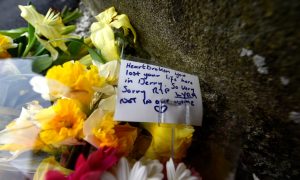 Police: ‘Lucky to Be Alive’ After Hoax Bomb Lured Them to Explosion; Northern Ireland

BELFAST—A bomb exploded in Northern Ireland after security forces investigated a “hoax device” nearby, meant to lure the officers.

Police said the device exploded in County Fermanagh, near the border with Ireland on Monday, Aug. 19.

The bomb was designed to lure in and kill officers examining the nearby hoax device. The team examining the device were lucky to escape with their lives.

Police received a report that a suspect device had been left in an area of County Fermanagh, just a few kilometers from the border late on Saturday.

Officers still at the scene on Monday reported an explosion nearby. There were no reports of any injuries, police said.

“While this investigation is at a very early stage, I am of the firm belief this was a deliberate attempt to lure police and ATO (army bomb disposal unit) colleagues into the area to murder them,” Deputy Chief Constable Stephen Martin said in a statement.

Simon Byrne, Chief Constable at the Police Service of Northern Ireland also said this was “a clear and deliberate attempt to murder.”

“I strongly condemn these actions and express my sincere thanks to both the Officers and Army personnel for their work in securing the area,” Police Chief Byrne said on Twitter.

The bomb attack in Fermanagh this morning is a sinister development. A clear and deliberate attempt to murder @PoliceServiceNI officers. I strongly condemn these actions and express my sincere thanks to both the Officers and Army personnel for their work in securing the area. https://t.co/ewQDuJ0Dzj

Arlene Foster of the Democratic Unionist Party also said on Twitter that: “This was a clear attempt to kill.”

“My thoughts are with the police officers / ATOs who escaped injury in Wattle Bridge. A reminder of the bravery of our security forces,” she tweeted.

My thoughts are with the police officers / ATOs who escaped injury in Wattle Bridge. A reminder of the bravery of our security forces. The threat from republican terrorists still exists. It’s time they left the stage & allowed everyone to move on.This was a clear attempt to kill.

Last month, on July 27, police said they received a report around midnight of a loud bang in the town of Craigavon shortly before a Belfast-based newspaper took a telephone call claiming that a device had been fired at a police patrol but had missed its target.

It was unclear if the device was fired at the passing patrol car or if the attack was set up to target police officers as they responded to reports from the public, police said.

In June, police discovered a bomb under a police officer’s car in Belfast that they said was probably planted by terrorist nationalists.