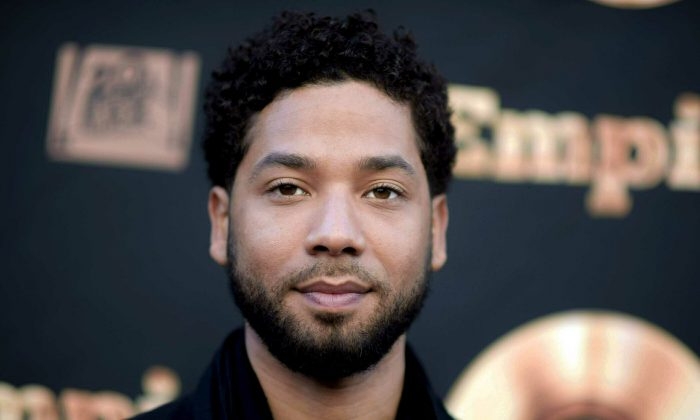 “Empire” actor Jussie Smollett has been named a suspect in a criminal investigation for filing a fake police report, according to a police statement.

Chicago Police Department (CPD) spokesman Anthony Guglielmi posted on Twitter on Feb. 20 that the actor “is now officially classified as a suspect in a criminal investigation by Chicago Police for filing a false police report (Class 4 felony).

A class 4 felony under Illinois sentencing law carries a maximum penalty of three years in prison.

Guglielmi’s announcement is the latest development in Smollett’s case where the 36-year-old actor claimed that he was attacked by two masked men as he was walking home from a restaurant on Jan. 29. He also said that during the attack, the men dumped bleach on him and wrapped a rope around his neck, saying that Chicago was “MAGA country,” which is a reference to Trump’s slogan “Make American Great Again.”

The two brothers, Ola and Abel Osundairo, were arrested by the police at Chicago’s O’Hare International Airport after they returned from Nigeria only to be released without charges on Feb. 15. A police spokesman said the two are no longer considered suspects and that investigators have new evidence to consider as a result of questioning them.

According to reports, the Osundairo brothers told police that they were paid to stage the attack. They reportedly told detectives Smollett paid them $3,500 before they left for Nigeria on the day the attack was reported.

Additionally, Smollett allegedly rehearsed the attack with the brothers before it was staged on Jan. 29. He also gave the brothers money to buy the rope, which was purchased from the Crafty Beaver Hardware Store on Jan. 25, CBS reported. The hat was bought at a beauty supply store.

Two federal official sources briefed on the investigation told ABC News that the brothers alleged that Smollett staged the attack on himself because he was upset that a threatening letter he received a week before had not generated enough attention. The officials added that the FBI and U.S. Postal Inspection Service are still investigating that allegation but have not confirmed that it happened.

The Osundairo brothers were set to have their testimony officially documented before a grand jury but Smollett’s legal team presented information to prosecutors to delay the brother’s testimony, sources told Fox News.

“The two brothers involved in this incident were at a Chicago courthouse meeting with detectives and prosecutors. They did not get seated before a grand jury,” the CPD said in a statement on Feb. 19.

Earlier today, Guglielmi told ABC News that they were seeking a follow-up interview with Smollett and have spoken to the actor’s lawyers. He added that if the actor does not speak with police, CPD would come up with “other methods to create a culture of accountability.”

While we are not in a position to confirm, deny or comment on the validity of what’s been unofficially released, there are some developments in this investigation and detectives have some follow-ups to complete which include speaking to the individual who reported the incident. pic.twitter.com/b9GgXbSUt9

“We are hopeful that we’ll have a chance to ask the questions that we have,” Guglielmi told the news station.

“It doesn’t matter what the investigation shows. If you have information that’s helpful to law enforcement, it behooves you to contact authorities and share that information. We have been very diplomatic and have been working with him and his attorneys. We got information, and that’s what we want to run by him,” he said.

Previously, Smollett’s lawyers said late on Feb. 16 that the actor felt “victimized” by reports that he played a role in the assault, adding that, “Nothing is further from the truth and anyone claiming otherwise is lying.”

Chicago’s top prosecutor, Cook County State’s Attorney Kim Foxx, recused herself from the investigation. Her office says the decision was made “out of an abundance of caution … to address potential questions of impartiality based upon familiarity with potential witnesses in the case.”

On Feb. 20, she clarified her reasons with the news station, saying, “Shortly after the incident occurred in late January, State’s Attorney Foxx had conversations with a family member of Jussie Smollett about the incident and their concerns, and facilitated a connection to the Chicago Police Department who were investigating the incident. Based on those prior conversations and out of an abundance of caution, last week State’s Attorney Foxx decided to remove herself from the decision making in this matter and delegated it to her First Assistant Joseph Magats, a 28-year veteran prosecutor.”

Meanwhile, many people have reacted to the case including Donald Trump Jr., President Trump’s son, who noted that many people who initially issued statements on the attack quietly deleted them, including presidential contender Sen. Kamala Harris (D-Calif.).

In a Twitter post, he said: “It appears that Jussie Smollett tried to manufacture a hate crime to make Trump supporters look bad and most of the media not only uncritically accepted his lies as facts for weeks but attacked those who questioned the validity of his false story.”

In his recent comments, Trump Jr. wrote, “Has anyone set the over-under on how long it will take Jussie Smollett and his Hollywood/Media enablers to find a way to blame “America” and “society”  for his disreputable actions? We all know it’s only a matter of time.”

Has anyone set the over-under on how long it will take Jussie Smollett and his Hollywood/Media enablers to find a way to blame “America” and “society”  for his disreputable actions? We all know it’s only a matter of time.

Reporter Zachary Stieber and The Associated Press contributed to this report