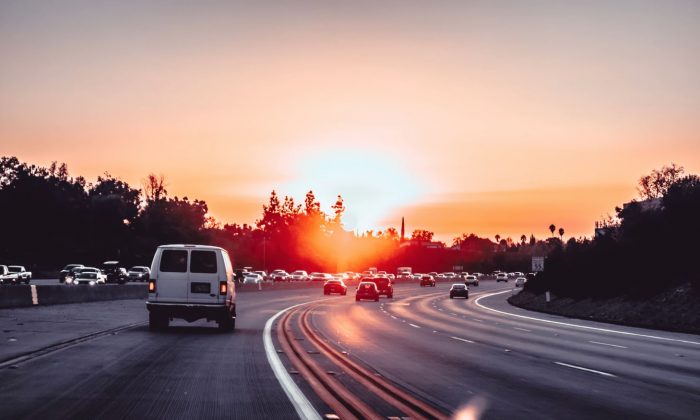 File photo of traffic on a highway. (Xan Griffin/Unsplash)
US News

Officials are investigating a matter involving a dog tied to the back of a moving tow truck on a freeway after a photo of the pup went viral on social media, where it sparked a wave of online outrage.

Michael Gerry took a photo of “what looked like a stuffed animal” on the back of a tow truck in Waltham, Mass. But when Gerry realized it was a real dog, he told WHDH his “blood pressure went through the roof.”

The photo shows a dog sitting on the back of a tow truck flatbed while chained to the vehicle. There is also a van on the flatbed. The photo was taken while on the freeway on Route 95, according to a Facebook post by the Massachusetts State Police.

Gerry said he wasn’t able to catch the driver’s attention and then lost the truck when it exited the freeway.

“So I am beeping the horn, trying to get this guy’s attention,” he said. “He’s not even paying any attention to me. So, traffic started moving and I had to keep going. I couldn’t get in front of him or behind him,” he told WHDH.

He called the police then uploaded the photo to Facebook on July 17.

“I posted it on Facebook for my buddies to just kind of put it out there and it went unreal… it went ballistic,” he said.

The truck belongs to Ramsay’s Towing, a Waltham-based business, which has reportedly been flooded with calls by people expressing their outrage. The company released a statement saying the driver had been fired on its Facebook page, which appears to have since been deleted.

“We have just been made aware of the photo that is circulating on Facebook,” Ramsay’s Towing said in a Facebook post, as cited by WCVB. “We do not support the driver’s actions and he was terminated immediately.”

The owner of Ramsay’s Towing, Justin Ramsay, told Boston 25 News the dog belongs to the tow truck driver. Ramsay said the dog was chained to the bed of the tow truck because the cab was full.

Massachusetts State Police were cited by WCVB as saying they were investigating the incident “actively and aggressively.”

“Troop A of the Massachusetts State Police continues to investigate circumstances surrounding a dog being transported on the open flatbed of a tow truck on Route 95 yesterday,” the department wrote in a Facebook post. “Law enforcement officers from the Animal Rescue League of Boston are also conducting their own investigation,” it added.

“The dual investigations aim to determine who was responsible for the dog being carried on the open flatbed, the owner and condition of the animal, and whether law enforcement action is warranted against anyone responsible.”

“We are trying to find out how many times that was done so we know of two. That’s been a violation of the law for years,””Lieutenant Alan Borgal, director of Law Enforcement, told the broadcaster.

Gerry told the news outlet he is animal lover and hopes he can speak for animals who can’t speak for themselves.

“The only reason I’m doing this–somebody needs to be a voice for the animal so that’s what I’m doing because they don’t have a voice. It’s just not right, plain and simple,” Gerry told CBS. “There was enough slack on that leash that that dog could have easily fallen off the side and been caught up in the tire and he would have never known.

“An animal is part of your family,” he said, adding, “He deserves more than just losing his job.”

Some of the fury has spread to an unrelated towing business in Kansas bearing a similar name: Ramsey Towing.

“NO THIS IS NOT US,” wrote Ramsey Towing on its Facebook page. “We have been getting many messages / posts about this photo & it clearly states they are based out of Waltham M.A. we are out of Douglass, KS,” the company added.

“And it’s spelled Ramsey not RAMSAY,” the page admin wrote, adding, “we are a pet friendly company, we have been known to let pigs, sugar glider monkeys and many dogs ride in the cab of our tow trucks.”

“I can only imagine some of the crazy messages you guys have been getting,” wrote one person in a comment.

“This whole thing amazes me,” the company continued. “I’m still receiving posts and messages from people who believe this is our truck. I’m not sure why our page keeps popping up lol we are a mom and son owned tow service from a small town of 1200 people, we are not used to this much attention.”

“I think it was a suggested spelling for me,” another person wrote. “Probably because so many people have already looked it up and don’t know how to spell Ramsay correctly. I guess enjoy the free fame?”