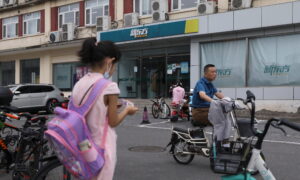 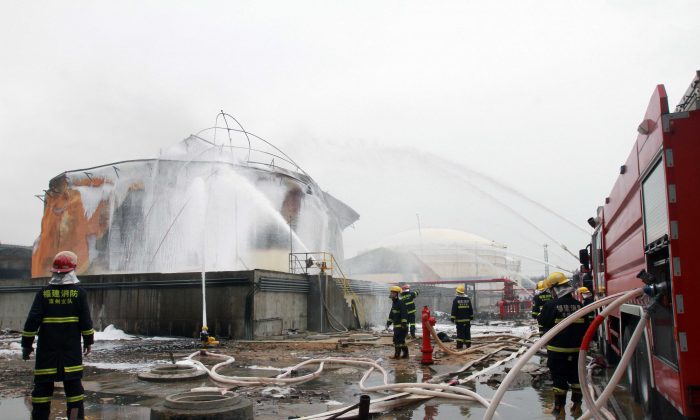 Firefighters douse a chemical tank after a blast at a plant producing paraxylene—a chemical commonly known as PX—in Zhangzhou, Fujian Province, China on April 9, 2015. Almost 30,000 people living near a Chinese chemical plant where a huge fire blazed for a total of nearly 50 hours were evacuated before the flames were finally extinguished. (STR/AFP/Getty Images)
Social Issues

BEIJING—A Chinese environmental journalist’s account of police harassment while reporting on a chemical spill has sparked widespread condemnation online and an apology from the police.

Chinese financial publication Caixin on Nov. 18 published an article by reporter Zhou Chen describing how local authorities had trailed her for days as she reported on a leak of a petrochemical substance in the coastal city of Quanzhou in China’s southeastern Fujian Province.

Late on Nov. 11, the last evening of her trip, four policemen entered her room without permission and searched her belongings while she was in her pajamas, Zhou wrote.

“After the police left, I was frightened into a state of indecision for a long while. How could they just barge right into the hotel room of a law-abiding citizen who had registered at check-in,” she wrote.

On social media she likened the experience to being the subject of a police raid carried out to catch prostitutes and their clients.

The article set of a wave of criticism of the police on social media, leading to a rare apology from the local authorities and for one officer to be suspended and investigated, state media said.

While foreign correspondents in China often write about their experiences of harassment by police, it is unusual for Chinese journalists to publicly complain.

Other journalists also came forward with their own stories of police following them and interfering in their reporting.

One female journalist wrote of an incident in 2014 when a male police officer had forced her to provide a urine sample in a hotel bathroom with glass walls.

“Reporters being ‘accompanied’ seems to be becoming a new normal within journalism,” wrote another Caixin journalist, Liang Yingfei.

Once, while reporting in northern China, she was called back to her hotel by reception staff who said there was a leak in her room, but once she arrived she discovered it was a ruse by officials who were waiting in the hotel lobby, Liang wrote.

In another case, one of Liang’s interviewees called her and said he had been repeatedly investigated after speaking to her for a story.

“All I could do was repeatedly comfort him by saying that reporting is not a crime and neither is accepting interviews,” Liang wrote.

Some social media commentators said the case reflected a tendency of officials to abuse their authority.

“We continuously stress the need for ‘law-based governance,’ but … officials can abuse public power whenever they want in order to protect their position,” one user wrote.