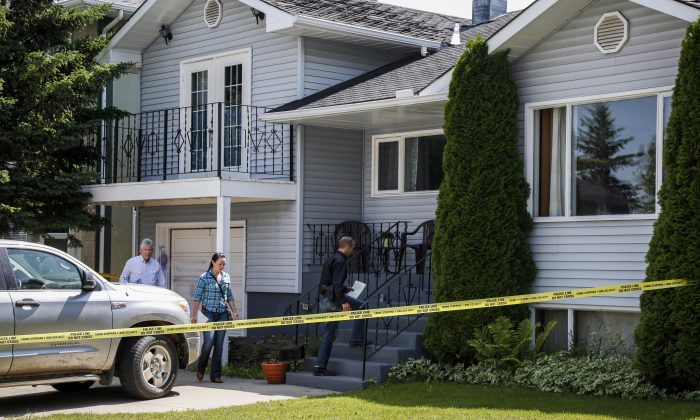 Police investigators check out the Calgary home of Alvin and Kathryn Liknes, who went missing with their 5-year-old grandson Nathan O'Brien on June 29, 2014. (The Canadian Press/Jeff McIntosh)
Canada

CALGARY—Calgary police expanded their search for a missing boy and his grandparents to a garbage dump Wednesday, as the man they consider a person of interest in the case learned he could be released from custody as early as Friday.

Police spokeswoman Emma Poole said seven officers were going through the Spyhill Landfill, northwest of the city, looking for evidence in the disappearance of Nathan O’Brien, 5, and his grandparents Alvin and Kathy Liknes.

She said the search is routine in such missing persons cases and it’s expected officers will be checking other landfills in the area as well.

While the search was underway, Douglas Garland appeared in court on identity theft charges unrelated to the missing persons case.

Police say 54-year-old Garland was questioned last weekend in relation to the disappearance and officers continue to search his parents’ rural property north of Calgary.

He appeared in court via video from the Calgary Remand Centre for what was supposed to be a bail hearing.

But the Crown and defence both agreed Garland could be released with a number of conditions. He first needs to provide a new address for where he would be staying, with the search ongoing at the farm where he had been living.

He is to return to court Friday.

At one point Garland, dressed in a blue jail jumpsuit, leaned in close to the court camera, explaining to the judge that he had bad eyesight.

His lawyer made it clear he is only representing Garland on the charge of identity theft.

“I can only comment today on what was before the court,” said Kim Ross. “I’ve only been retained on the charges unrelated to any other investigation that’s going on right now. I have absolutely no knowledge of anything else other than the charges that are before the court here today.”

Nathan and his grandparents were last seen June 29, following an estate sale at the couple’s home.

Police believe a violent incident took place in the home, but have maintained they still hope to find the three alive.

Court records show Garland has a criminal past and mental problems.

In 2000, he was sentenced to 39 months in prison for making amphetamines at his parents’ farm.

When the Parole Board of Canada later gave him accelerated release after six months, it noted in its decision that Garland’s prior criminal record consisted of various property offences over the course of 20 years.

His mental health played a role in the crimes, the board said, but a psychologist determined that Garland had “little violence potential to others.”

It ordered a psychologist and psychiatrist to closely monitor him during his release.

A federal tax court ruling later in 2005 detailed more about Garland’s past, indicating that he went to medical school for a year but left after having a mental breakdown. It also said he suffers from attention deficit disorder.

The document said that when Garland was first arrested on the drug charges back in 1992, he skipped bail and fled to Vancouver. He assumed the name of a dead person and got a job working for a laboratory company.

He was good enough to be promoted to supervisor but suffered another breakdown and was fired in 1997. Mounties eventually caught up with him on the drug charges and he pleaded guilty in court.

After he was released from prison, the Canada Revenue Agency went after him for employment insurance benefits it paid out after his laboratory job because he had been using a fake name and a fake social insurance number.

Garland took the agency to court and, acting as his own lawyer, won.

Calgary police have confirmed that Garland has a connection to the missing family members. His sister is in a relationship with a member of the Liknes family.

Calgary Police and RCMP continued to search his parents’ rural property near Airdrie on Wednesday, bringing in paramedics and fire units.

The temperature was expected to hit near 30 C and the paramedics were there are a precaution for the searchers, while the fire department was on hand in case any chemicals were found on the property.

Officers continued to guard the entrance to the tree-lined driveway. One of the police tactical vans, along with a number of vehicles, were visible on the property from the adjacent road.

Earlier in the week, dozens of officers searched ponds and stands of trees up to three kilometres away from the acreage.

Police urged property owners in rural areas outside of Calgary and companies who own rural sites, such as oil wells, to check their land for anything suspicious.

With files from Chris Purdy in Edmonton