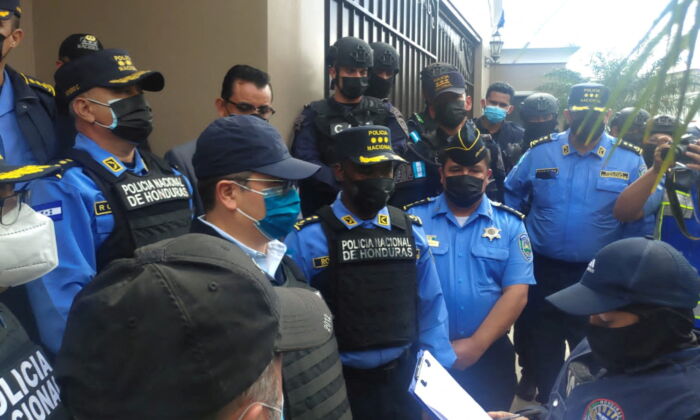 TEGUCIGALPA—Honduran police detained ex-President Juan Orlando Hernandez on Tuesday, escorting him from his home in handcuffs and chains, following a U.S. extradition request on drug charges that marked a dramatic fall from grace only weeks after Hernandez left power.

In live footage shown on national TV, police officials gave Hernandez a bullet-proof vest and placed a chain between his handcuffed wrists and ankles before taking him to a nearby base for police special forces in Tegucigalpa, the capital.

Hernandez was shown seated at a table where doctors undertook a medical examination in front of the media, including unbuttoning his shirt to put a stethoscope on his chest, according to live HCH Noticias images. Hernandez was then driven away.

The former leader’s detention came after a Honduran judge on Tuesday ordered his arrest following the U.S. extradition request on drug-trafficking and weapons charges.

A U.S. Embassy document, seen by Reuters on Tuesday, showed that U.S. authorities charged that Hernandez participated in a drug-trafficking scheme between 2004 and 2022.

The document alleged Hernandez was part of an operation to receive tonnes of cocaine from Colombia and Venezuela, which were to be shipped onwards to the United States.

Hernandez received millions of dollars in bribes in exchange for protecting traffickers from investigation and prosecution, the document said. The firearms charges included carrying, using, or aiding and abetting the use of weapons, including machine guns.

Hernandez, 53, who was replaced as president last month by leftist Xiomara Castro, has pledged to cooperate with national police. He has denied any wrongdoing.

Hernandez was set to spend the night in a police station and appear before a court on Wednesday morning.

Washington’s request for extradition was in stark contrast to a period when the U.S. government saw Hernandez as a vital ally in volatile Central America during his eight years in power.

Ramon Sabillon, Honduras’ security minister, said that Hernandez’s capture was a “historic” feat, although the former president came out of the house and surrendered.

The U.S. State Department said its policy is not to comment on extradition requests. A spokesman for the U.S. Attorney’s Office in Manhattan declined to comment.

Honduras’ Supreme Court, which will rule on the extradition request, met on Tuesday and appointed a judge to oversee the case. The process could last between two and three months, according to Hernandez’s defense.

A presidency source said Castro would not comment publicly until the Supreme Court had reached its decision.

Expectations had grown in recent months that Hernandez would face an extradition request after leaving office.

Last year, a U.S. judge sentenced Hernandez’s brother to life in prison plus 30 years for drug trafficking, and the former president was named as an unindicted co-conspirator in another drug trafficking case in New York.

Hernandez had been holed up in his home after about 100 police officers surrounded it late on Monday, after Honduran authorities received the U.S. request for his extradition.

In the early hours of Tuesday, Hernandez posted a message on Twitter saying he had informed the police that he was “ready to collaborate.” His lawyer alleged his rights had been trampled as he had immunity as a member of a regional congress.

However, any immunity bestowed by Parlacen, which comprises elected officials as well as former presidents and vice presidents, can be removed or suspended at the request of a member’s home country.

Hernandez’s legal defense issued a statement earlier Tuesday saying there was no need to arrest the former leader.

“Given Mr. Hernandez’s stated will to voluntarily submit to the extradition process, there is no need to proceed with the issuance of an arrest warrant or preventive arrest warrant, since his volunteered presence guarantees the normality of the procedure,” the statement said.