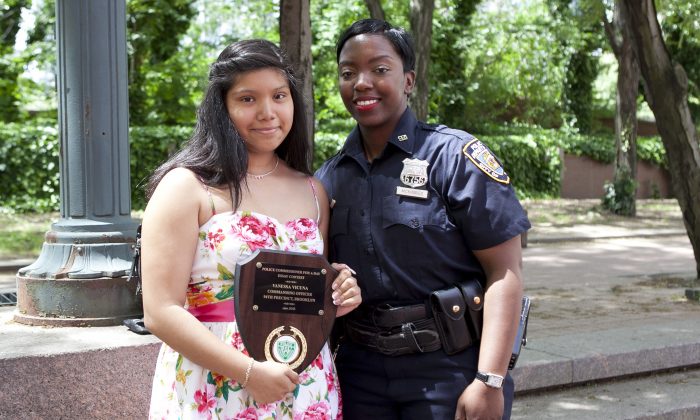 Police Commissioner for a Day Thinks Kids Should be Positively Engaged

NEW YORK—Every year the city lets kids walk in the shoes of police officers for a day.

The groups of teenagers get access to the world of police work by taking part in an essay contest, with the top winner chosen to be police commissioner. Participants write essays about programs they would create to improve the city if they had the top cop job. This year’s theme was on how to keep kids away from illegal handguns.

Essay contest winner and Police Commissioner for a Day Vanessa Vicuna said that she “felt very proud” to be chosen as a contest winner. The issue of keeping kids away from violence is simple, she said: keep them positively engaged.

“Frequently kids are talking about video games and watching TV [where there is violence],” said Vicuna after a swearing in ceremony at police headquarters in Lower Manhattan. “Instead of being out in the streets, they can do more constructive things.”

Just 14 years old, Vicuna volunteers in the YMCA Scholarship Program, and is part of the Brooklyn 94th Precinct’s Explorer Program, where she helped write the essay that won the contest.

“We did a group essay and her portion was the majority of the essay,” said Police Officer Shantel McKinnes, who oversees the kids in Vicuna’s program. There are 15 youth in the group, ranging in age from 11 to 17.

“She thinks kids should be more occupied instead of watching TV or being on the streets,” said McKinnes.

In addition to Vicuna, about 130 other young people were assigned for the day throughout the five boroughs as deputy commissioners, police chiefs, borough commanders and precinct captains.