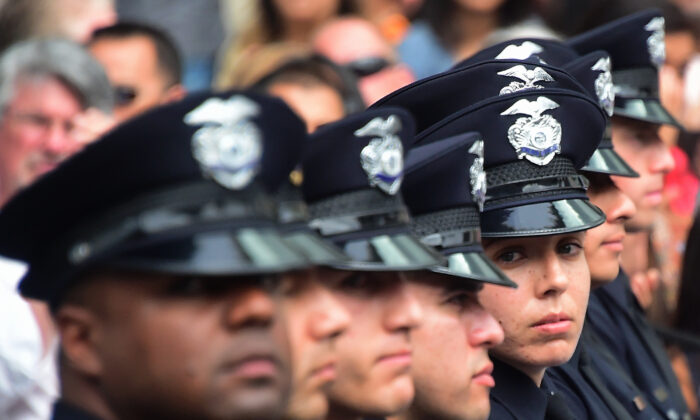 LOS ANGELES—The Los Angeles Police Commission approved Sept. 28 an $18.5 million plan from the police department aimed at improving how it handles protests and civil unrest, but the City Council will need to approve
the funding increase.

The Los Angeles Police Department (LAPD)—which has a $1.76 billion budget this fiscal year—had initially submitted a proposal seeking an additional $66.7 million to incorporate 106 recommendations from three reports released in March and April claimed the department lacked preparedness, training, and unity of command when responding to protests.

The original request was reduced to $18.5 million when the police commission asked the LAPD to re-evaluate its recommendations and the cost.

The new proposal calls for nearly $12.6 million for training, with the top two priorities being mobile field force training and the use of less-lethal launchers, which the reports claimed officers weren’t properly trained in and in some circumstances used against peaceful protesters.

The report called for all department officers to receive mobile field force training every two years, with half the department being trained one year and the other half the next. Much of the funding for training is for overtime for officers, so that it does not cut into patrol duty.

The department’s proposed recommendations also include more than $4.1 million for technology and equipment, including for four officers and four intelligence analysts to form a new team monitoring social media. The budget would also purchase social media software.

Commander Randy Goddard told the police commission that social media software helps the department “due to the volume of information across so many platforms, channels, apps, and services.”

“Software assists a small group of trained personnel in vetting and making sense of this information,” Goddard said.

The reduction from the original $66.7 million request was made available to the public on Friday afternoon, which drew some criticism because it left only one business day for people to review it before submitting public comment to the commission.

Both proposals were met with opposition from activists calling for a continued decrease to the LAPD’s budget. Following the scaled-back proposal released Friday, activists reiterated their opposition to any additional funding for the LAPD.

“This is yet another police money grab, using LAPD’s violence to increase police resources and spy powers,” the Stop LAPD Spying Coalition said. “This is the opposite of what our communities faced down LAPD violence last summer to demand: defunding the police.”

“I do understand that there are many who believe that the money should not be spent on this department, that it should go elsewhere,” Decker said. “I understand that the city does need to invest in community resources, but I also believe the city needs to invest in the department, as well as in these training procedures. These issues I don’t think are mutually exclusive.”