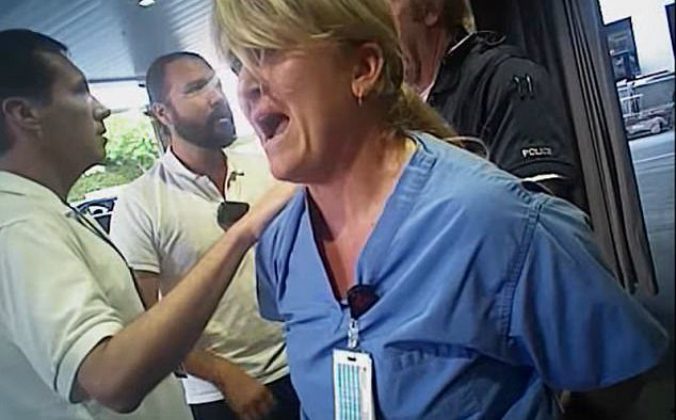 It turns out the man a Utah nurse protected from an unlawful blood test, at the cost of her own forceful arrest, was an off-duty reserve officer.

University of Utah nurse Alex Wubbels was arrested for refusing to violate hospital policy created in coordination with police that prohibited her from drawing blood from a patient without either their consent, an electronic warrant, or without the patient being under arrest.

Video of Salt Lake City Detective Jeff Payne threatening, and then arresting, Wubbels for refusing to take a blood sample form her patient has resulted in the city’s mayor and police chief apologizing as others thanked her for her bravery.

The patient in question was Rigby, Idaho reserve police officer William Gray, who was struck by a fugitive on July 26 while driving a semi-truck for his work.

Now Rigby Police Chief Sam Tower is thanking Wubbels for defending the rights of his officer, who was never under investigation to begin with.

“William Gray, was the victim in a horrific accident in northern Utah while working his full-time job as a truck driver,” said Tower in a statement.

The suspect died in the accident while fleeing from Utah State Highway Patrol. He crossed into oncoming traffic and collided head-on with Gray’s truck.

Gray was flown to the University of Utah’s burn unit “where he remains under their watchful, professional, and competent care,” wrote Tower.

“The Rigby Police Department would like to thank the nurse involved and hospital staff for standing firm and protecting Officer Gray’s rights as a patient and victim. Protecting the rights of others is truly a heroic act.

“The Rigby Police Department would also like to acknowledge the hard work of the involved agencies, and trusts that this unfortunate incident will be investigated thoroughly and appropriate action will be taken.”

Salt Lake City Police Chief Mike Brown told reporters he regretted the rift that the incident caused between law enforcement and nurses, and that the body camera footage was being reviewed and an internal affairs investigation was already underway.

“I was alarmed by what I saw in the video,” said Brown. “We take this very seriously.”

Wubbels has since spoken out about the incident, calling for better work between police officers and medical staff.

In an interview on CNN, Wubbels said she felt betrayed, not just by the offending officer, but by the hospital police that did nothing to stop her illegal arrest.