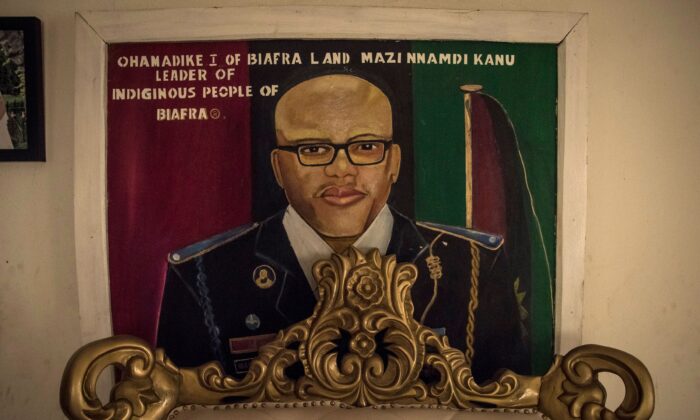 An image of Mazi Nnamdi Kanu, leader of Indigenous People of Biafra (IPOB) hangs on a wall in a house in Umuahia, one of the pro-Biafran separatist regions, on Feb. 13, 2019. (Cristina Aldehuela/AFP via Getty Images)
Africa

The clash took place on Monday when a large group of gunmen were spotted driving into the town of Omuma in a convoy of three vehicles. Police attacked them, resulting in the seven deaths and in 11 arrests.

The police gave no information about the bandits—a term commonly used in Nigeria to describe a range of criminals such as armed robbers or kidnappers for ransom.

Southeastern Nigeria, homeland of the Igbo ethnic group, has been tense in recent weeks since the leader of a banned organization campaigning for the region to secede was detained abroad and returned to Nigeria to face trial for treason.

Nnamdi Kanu, leader of the Indigenous People of Biafra (IPOB) group, had been due to appear in court in the federal capital Abuja in central Nigeria on Monday, and across the southeast many people stayed at home in solidarity with him.

In the past, the authorities have blamed IPOB members for attacks on police stations in the southeast. An IPOB spokesman said the gunmen arrested in Omuma were unknown to the group.

Insecurity has been rising sharply across Nigeria in recent months, partly driven by economic hardship.

The northwest has been hit by a wave of mass abductions of schoolchildren by ransom seekers. The northeast remains mired in an Islamic insurgency that has killed an estimated 350,000 people over a decade.

Armed robberies are rife across the country, and conflict between herders and farmers is also a cause of frequent deadly clashes.