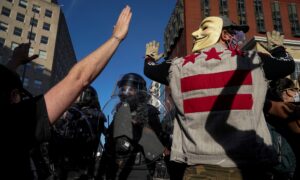 Police in Texas are asking for help from the public in locating a missing teenage girl.

Harris County Sheriff deputies believe 13-year-old Ashlee Kay Hattermann ran away from home on Friday, Dec. 1. The teenager is described as a 5’4″ white female weighing 110 lbs. She has brown hair and blue eyes.

“She may be in the Rio Grande Valley area and headed to Mexico,” the department said in a Facebook post.

On Saturday the girl’s frantic parents told WFAA that their daughter left school yesterday and believed she was headed to Mexico. Whats worse, the family says, is that they believe Ashlee was on her way to meet a man she had been talking to online and on the phone in the past year.

“We found a note in her room,” said Ashlee’s father Keith Hattermann. “She calls the guy ‘daddy’ and herself ‘baby girl.’ [The note read] ‘Daddy owns my body and my soul,’ over and over and over again down this sheet of paper.”

Surveillance footage from a Greyhound bus stop in Katy, Texas, shows the teenager with an unknown woman.

The woman, who wishes to be anonymous, told WFAA that Ashlee talked to her on Friday and lied to her about her age before buying a bus ticket to Laredo.

“I asked her how old she was; she said 18,” the woman told WFAA “She told me she was here all week, visiting her boyfriend. She told me that [her parents] lived in Laredo and that she had been up here to visit her boyfriend and she was trying to get back to her family.”

The unnamed woman said she is emotional over the incident.

The parents, Keith and Tiffany Hattermann, told WFAA they also found their daughter exchanging sexual images and messages through apps on her phone last May. They do not know how Ashlee purchased the phone.

The mother, Tiffany Hatterman, said her daughter told her last spring that she was communicating with a 29-year-old man who lives in Mexico.

The family turned over their daughter’s phone to the Cyber Crimes Division of the sheriff’s office. They said they only found out yesterday from one of their daughter’s friends that Ashlee had been using the iPhone to communicate with someone in the Thornton Middle School library.

Anyone with information is urged to call the Harris County Sheriff’s Office Missing Person/Runaway unit at 713-274-9210.