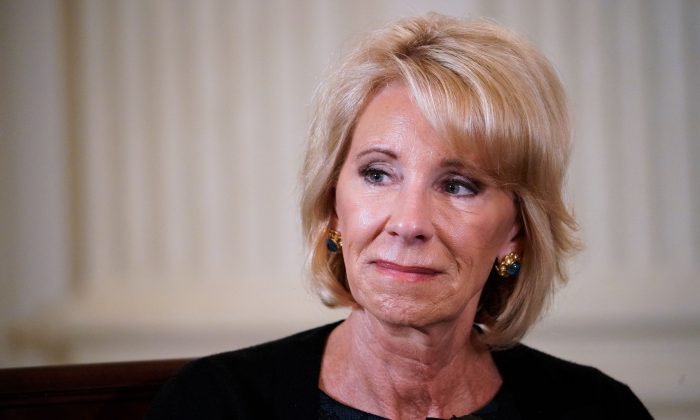 US Education Secretary Betsy DeVos takes part in a listening session on gun violence with teachers and students in the State Dining Room of the White House on February 21, 2018. (MANDEL NGAN/AFP/Getty Images)
Crime and Incidents

The Yacht, named Seaquest, was previously moored at the Huron Boat Basin at 330 Main St., Huron, Ohio, before the captain alerted police around 6 a.m. on Sunday, July 22, to report it had been “untied from the dock and was adrift.”According to a record of the police report, officer James L. Bowens responded to the call.

Captain Quintynn Botha told the officer that crew members woke up at sunrise to find the boat untied.

“They were able to regain control of the ship but not before it struck the dock with its Starboard forward section,” Bowens wrote in the official police report. “He showed me the damage which consisted of several large scratches and scrapes.”

Botha estimated the damage caused to the yacht could cost between $5,000 and $10,000 to repair. He also told police that the crew found nothing suspicious the night before the boat was untied.

No injuries were reported and the investigation is still ongoing. Officer Bowens is in the process of obtaining surveillance footage of the incident, according to the police report.

“The concern from the city’s standpoint is that’s a very expensive yacht and we want to show the patrons who come to the city that we’ll provide good service,” Huron City manager Andy White told The Sandusky Register. “This is a blemish on the city and we’d rather do without and we’ll seek to have justice done for this act.”

As of July 26, no suspect or person of interest had been named by police.