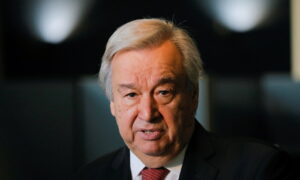 KIEV/WARSAW—Poland temporarily closed its consulates in Ukraine after a grenade attack overnight at one of its buildings near the Polish border that Kiev said was intended to harm bilateral ties with Warsaw.

Relations between Poland and Ukraine have deteriorated in the past year in a row over World War II atrocities, although Warsaw still strongly supports Western sanctions imposed on Russia for the 2014 annexation of Ukraine’s Crimea Peninsula.

Ukraine’s President Petro Poroshenko and Polish president Andrzej Duda both condemned the attack, which took place in the early hours on Wednesday in the town of Lutsk near the border.

No one was hurt but the roof of the Polish consulate there and some windows were damaged. Ukraine’s Security Service said the weapon used appeared to be a rocket from an RPG-26, a disposable anti-tank launcher developed by the Soviet Union.

“The investigation considers several options of the incident, including act of terrorism,” the security service said in a statement.

“The provocations against the Republic of Poland, which once in a while occur in Ukraine, are of benefit only to one party – the Russian Federation. Its methods of operation can be seen from far off.”

Russia’s Foreign Ministry did not immediately respond to a Reuters request to comment, but a spokeswoman for the ministry, Maria Zakharova, refuted Kiev’s assertions on social media.

Russian officials say Ukraine and the West are waging an anti-Russian campaign which involves firing off false and unsubstantiated allegations against Moscow at regular intervals.

Poroshenko’s spokesman said on social media that Russian state security had tried to orchestrate a prank call on Wednesday to Poroshenko by pretending to be Duda.

“The ‘pranksters’ did not know that such a call had already taken place and that Poland‘s presidential administration is in constant contact with the administration of the Ukrainian president,” Poroshenko’s spokesman, Svyatoslav Tsegolko, wrote.

Duda said the grenade attack incident required “decisive intervention”, according to a statement on his website.

The head of Poland‘s National Security Bureau, Pawel Soloch, said: “Undoubtedly, this was a provocation.”

“The question is: who did it and for what purpose? We know the context – there is a Russian aggression against Ukraine,” he said on Polish private RFM-FM radio.