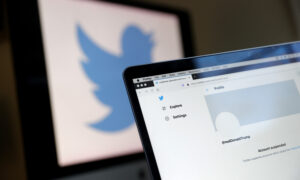 A photo shows the logo of the the American online social media and social networking service, Facebook and Twitter on a computer screen in Lille on Oct. 21, 2020. (Denis Charlet/AFP via Getty Images)
Censorship & Socialism

New laws proposed by Poland could implement massive fines for tech giants who censor users or remove posts for ideological reasons, according to the country’s Deputy Minister of Justice Sebastian Kaleta.

Speaking to Fox News, Kaleta said social media companies have been targeting conservatives, Christianity, and traditional values by banning them or removing posts.

“We see that when Big Tech decides to remove content for political purposes, it’s mostly content which praises traditional values or praises conservatism,” Kaleta said, adding, “and it is deleted under their ‘hate speech policy’ when it has no legal right to do so.”

Poland’s decision comes following the banning of former President Donald Trump’s accounts by the social media companies Twitter, Facebook, and Instagram, after he was blamed for inciting violence at the Jan. 6 demonstration at the U.S. Capitol.

“Freedom of speech is not something that anonymous moderators working for private companies should decide,” Kaleta said.

“Instead, that is for the national body; duly elected officials and all industries, car, phones, finance, were unregulated till they grew too large; the same should happen with Big Tech.”

“It’s very disturbing because if Big Tech sees themselves as an organization empowered enough to ban a sitting president of the U.S., it sends a message to the world—that we can ban anyone, whenever we want,” he added.

Advancing the new legislation, Kaleta noted that Poland has spent 45 years under communism—an experience he said has taught it the value of free speech and the need to know when to draw a line amid disturbing new trends toward censorship.

In a lengthy Facebook post on Jan. 13, Morawiecki wrote that the internet, over time, has come to be dominated by international corporations that treat people’s online activity as a source of revenue and a tool to increase their global domination.

“Discussion consists in the exchange of views, not in silencing people. We do not have to agree with what our opponents write, but we cannot forbid anyone from expressing views that do not contravene the law,” he added.

In a Facebook post, Varga raised the prospect of sanctioning social media firms over what she called “systematic abuses” of free speech and indicated that she was going to submit a bill later this year to “regulate the domestic operations of large tech companies.”

She alleged that she herself had also been “shadow-banned” by Facebook, and complained that mainstream social media sites “limit the visibility of Christian, conservative, right-wing opinions” and accused “power groups behind global tech giants’ of having the power to decide elections.”

Varga said in her post the matter should be regulated at the European Union level, but said swifter action may be needed. “Due to the systematic abuses, however, we may need to step up sooner,” she said.